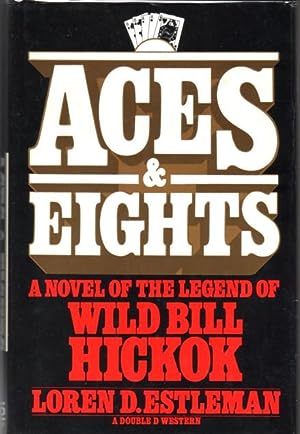 Recounts the trial of Jack McCall, the man hanged for the murder of Wild Bill Hickok

Loren D. Estleman was born in Ann Arbor, Michigan, and graduated from Eastern Michigan University with a BA degree in English Literature and Journalism in 1974. In 2002, the university awarded him an honorary doctorate in Humane Letters for his contribution to American literature.

He is the author of more than fifty novels in the categories of mystery, historical western, and mainstream, and has received four Western Writers of American Golden Spur Awards, three Western Heritage Awards, and three Shamus Awards. He has been nominated for the Edgar Allan Poe Award, Britain's Silver Dagger, the National Book Award, and the Pulitzer Prize. In 2003, the mammoth Encyclopedia of Detective Fiction named him the most critically acclaimed writer of U.S. detective


Check with order or credit card (Visa, Mastercard, Discover or American Express). Books may be
returned within ten days of receipt for any reason. Minnesota residents add
6.875% sales tax. Fireproof Books is a sole proprietorship. The business address
is 13958 Oakland Place, Minnetonka MN 55305. The email address is fireproofbooks@gmail.com.
The telephone number is 612-817-8993. Authorized representatives of the company
are Mark Larson and William Stevens.


Shipping costs are based on books weighing 2.0 LB or less. If your book order is heavy or oversized, we may contact you to let you know extra shipping is required.