Items related to Lightning Out Of Lebanon: Hezbollah Terrorists On American... 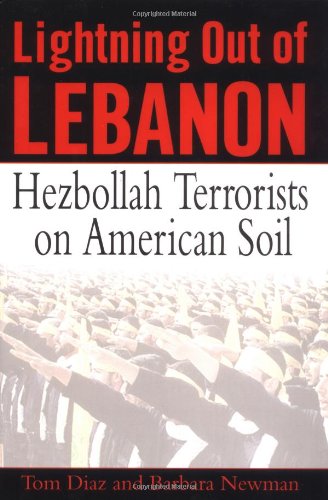 Lightning Out Of Lebanon: Hezbollah Terrorists On American Soil

Title: Lightning Out Of Lebanon: Hezbollah ...

Before September 11, 2001, one terrorist group had killed more Americans than any other: Hezbollah, the “Party of God.” Today it remains potentially more dangerous than even al Qaeda. Yet little has been known about its inner workings, past successes, and future plans–until now.

Written by an accomplished journalist and a law-enforcement expert, Lightning Out of Lebanon is a chilling and essential addition to our understanding of the external and internal threats to America. In disturbing detail, it portrays the degree to which Hezbollah has infiltrated this country and the extent to which it intends to do us harm.

Formed in Lebanon by Iranian Revolutionary Guards in 1982, Hezbollah is fueled by hatred of Israel and the United States. Its 1983 truck-bomb attack against the U.S. Marine barracks in Beirut killed 241 soldiers–the largest peacetime loss ever for the U.S. military–and caused President Reagan to withdraw all troops from Lebanon. Since then, among other atrocities, Hezbollah has murdered Americans at the U.S. embassy in Lebanon and the Khobar Towers U.S. military housing complex in Saudi Arabia; tortured and killed the CIA station chief in Beirut; held organizational meetings with top members of al Qaeda–including Osama bin Laden–and established sleeper cells in the United States and Canada.

Lightning Out of Lebanon reveals how, starting in 1982, a cunning and deadly Hezbollah terrorist named Mohammed Youssef Hammoud operated a cell in Charlotte, North Carolina, under the radar of American intelligence. The story of how FBI special agent Rick Schwein captured him in 2002 is a brilliantly researched and written account.

Yet the past is only prologue in the unsettling odyssey of Hezbollah. Using their exclusive sources in the Middle East and inside the U.S. counterterrorism establishment, the authors of Lightning Out of Lebanon imagine the deadly future of Hezbollah and posit how best to combat the group which top American counterintelligence officials and Senator Bob Graham, vice-chairman of the Senate Intelligence Committee, have called “the A Team of terrorism.”

BARBARA NEWMAN, author of The Covenant: Love and Death in Beirut, is a senior fellow with the Foundation for the Defense of Democracies and is the founder of Barbara Newman Productions, Inc., which has produced numerous documentary films for Discovery Channel, A&E Network, the History Channel, and Showtime, among others. She was senior producer/creator of the Now It Can Be Told series, a nationally syndicated newsmagazine, and, before that, an investigative producer for ABC News’s 20/20. She was also a correspondent for National Public Radio and hosted All Things Considered.

TOM DIAZ is the author of Making a Killing: The Business of Guns in America. From 1993 to 1997 he was the lead Democratic counsel on counterterrorism issues, helping to write key antiterrorism legislation. He has recently served as a consultant to the U.S. Department of Justice on the use of high technology by terrorists and as law-enforcement investigative tools. As a reporter he has covered conflicts and tensions in Central America, India, Pakistan, the former Soviet Union, and the closing days of the 1991 Gulf War.