Items related to Portrait of the Outer Banks: A Pictorial Tour 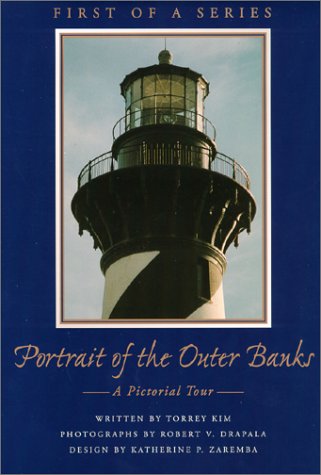 Portrait of the Outer Banks: A Pictorial Tour

Quantity: 1
View all  copies of this book
Buy Used
Price: US$ 12.00 Convert Currency
Shipping: US$ 5.00 Within U.S.A. Destination, rates & speeds
Add to basket

Title: Portrait of the Outer Banks: A Pictorial Tour

The book opens with photographs of a typical morning on the Outer Banks, where fishermen, wildlife, and beachcombers revel in the breathtaking sunrises that only the North Carolina Coastline can offer. In Buxton and Frisco, the hypnotic vision of seagulls flying overhead is balanced against a sole kayaker making her way across Pamlico Sound. Drapala captures the essence of these delicate barrier islands with an artists eye, while Kims text weaves a timeless history between the mesmerizing images. Even the Outer Banks lifelong residents will discover breathtaking views through the books photographs, some of which were taken from remote parts of the island that many people have never even visited.

Aerial and ground shots of the Outer Banks famous lighthouses are accompanied by the rich historical details of how these Lighthouses came into existence -- often a result of dramatic sea turmoil on the dark, rough waters of the North Carolina Coast.

Portrait of the Outer Banks is a timeless history that envelops the essence of Americas coastline: pristine beaches, weathered lighthouses, and salty old fishermen, along with a dose of unparalleled charm and beauty.

Portrait of the Past: The Civil War on Hatteras Island is much more than a colloquial retelling of one island's Civil War battle. In fact, this coffee-table book has national appeal because it deals with several firsts. Unbeknownst to some Civil War enthusiasts, the action on Hatteras Island included the following:
1. The first combined military operation of the Civil War (Naval and infantry forces attacked Hatteras);
2. The first amphibious assault of the Civil War (infantry troops landed in the surf);
3. The first Union victory of the Civil War; and
4. The first time the Federal government had to deal with the issue of bringing former Confederate territory back into the Union.
There is also a significant Civil War and U.S. Navy last occurrence: In the Naval bombardment of Forts Hatteras and Clark on August 28, 1861, the Cumberland became the last major U.S. Ship of War to ever sail into combat under sail power alone.
The Cape Hatteras Lighthouse is also viewed as a national treasure and its move in the year 2000 received national and international media coverage. The original lighthouse was directly involved in the Civil War action and fell under Confederate control until the Federal attack in August 1861.
The Civil War action of Hatteras Island and subsequent action in eastern North Carolina had a direct impact on Robert E. Lee’’s Army of Northern Virginia. Lee had thousands of men serving under him from North Carolina as he fought around Richmond and at Gettysburg. There North Carolina troops were demoralized by the realization that their home state, land and families had already fallen under Federal control or were in danger of doing so.
In addition, the book contains many never-before-seen journal drawings by a soldier who was stationed on the Outer Banks, featuring unsurpassed detail and beautiful artistry.
There is a growing national interest in the Civil War and in Heritage Tourism. This book will not only appeal to Civil War enthusiasts but also to families visiting the Cape Hatteras National Seashore. They will be made aware of the role the action which took place at Hatteras had on the entire Civil War.
This book is one of several in a series dealing with Civil War Naval engagements on the east coast of the United States. Possibly as many as six of these upcoming books will deal with subjects such as The Battle for Roanoke Island and Elizabeth City, Battles of New Bern and Plymouth, and The
Falls of Forts Macon, Fisher, Sumter and Pulaski. Each of these battles is of national significance, as they directly impacted the course of the war and the lives of soldiers and sailors from many states.