Items related to The Bluefish Cookbook : 101 Ways to Deal with the Blues:... 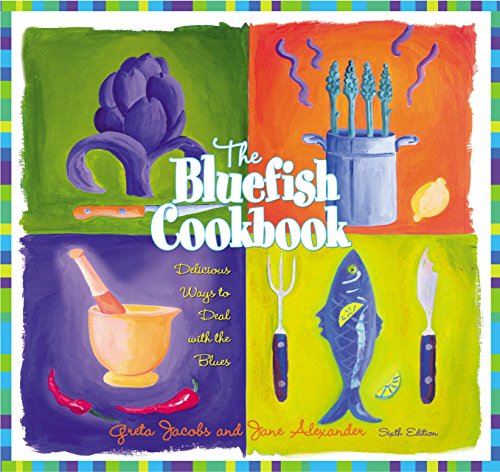 This book offers dozens of creative ways to prepare one of the Atlantic''s most delicious--and most abundant--fish. It includes easy, kitchen-tested recipes for chowders, salads, fish cakes, sandwiches, fritters, soups, and even a pate. Old standards, such as Baked Stuffed Bluefish, and more exotic selections, such as Thai-style Blue Satay, will make even the most bluefish-rich household a place of culinary diversity. Also included are a primer on filleting and basic cooking methods, plus instructions on how to smoke bluefish and how to steam fillets in your dishwasher! This sixth edition includes several new recipes, archival photographs, and amusing anecdotes about bluefish and bluefishing.

Recipes in The Bluefish Cookbook from notable restaurants:

Delicious Ways to Deal with the Blues!

Filled with more than 100 recipes ranging from simple to elaborate, The Bluefish Cookbook, now in its sixth edition, celebrates the versatility of an East Coast favorite. Learn how to bake, broil, fillet, and poach this tasty, abundant fish like a true connoisseur! Gourmet cook Greta Jacobs and Emmy Award-winning actress Jane Alexander have compiled tried-and-true recipes from their own kitchens as well as from their favorite restaurants to create this one-of-a-kind cookbook.