Items related to Interracial Intimacy: The Regulation of Race &... 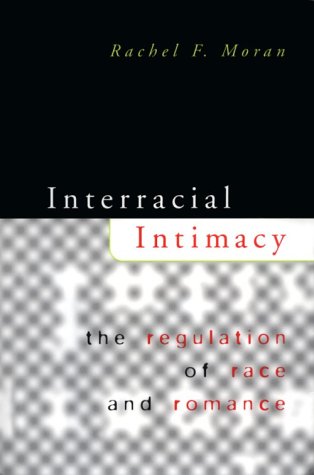 Quantity: 1
View all  copies of this book
Buy New
Price: US$ 90.00 Convert Currency
Shipping: US$ 4.00 Within U.S.A. Destination, rates & speeds
Add to basket

As late as the 1960s, states could legally punish minorities who either had sex with or married persons outside of their racial groups. In this first comprehensive study of the legal regulation of interracial relationships, Rachel Moran grapples with the consequences of that history, candidly confronting its profound effects on not only conceptions of race and identity, but on ideas about sex, marriage, and family.

"A good introduction to an issue too often overlooked. . . . The writing is clear and accessible, the evidence is evocative, and the ideas are challenging."—Beth Kiyoko Jamieson, Law and Politics Book Review

"U. S. government bodies have tried to regulate interracial intimacy from the day Pocahontas married John Rolfe up through Loving v. Virginia, which found antimiscegentation laws unconstitutional in 1967. . . . The weirder anecdotes from our racial history enliven this study, which is likely to become a classic in its field."—Publishers Weekly

"Moran examines the history of U. S. regulation of cross-racial romance, considering the impact of that regulation on the autonomy of individuals and families as well as on racial identity and equality. . . . She is attuned to the nuances of race in this polyglot nation, and supplies thoughtful analysis of these nuances."—Booklist

After decades of struggle to promote racial equality and ensure personal freedom, interracial intimacy remains one of the least understood areas of race relations in the United States. Few people realize that as late as the 1960s state legislatures were free to punish individuals who either had sec with or married persons outside their racial and ethnic groups. The first history of the legal regulation of interracial relationships, Rachel R. Moran's groundbreaking book also grapples with the consequences of that history.

Crossing disciplinary lines, Moran looks in depth at interracial intimacy in America from colonial times to the present. She traces the evolution of bans on intermarriage and explains why blacks and Asians faced harsh penalties while Native Americans and Latinos did not. She provides fresh insight into how these laws served complex purposes, why they remained on the books for so long, and what led to their eventual demise. As Moran demonstrates, the United States Supreme Court could not declare statutes barring intermarriage unconstitutional until the civil rights movement, coupled with the sexual revolution, has transformed prevailing views about race, sex, and marriage.

Although the Supreme Court established a principle of color blindness in the regulation of intimacy when it struck down bans on intermarriage, centuries of segregation in sex, marriage, and family life are not easily undone. Today high rates of same-race marriage persist, adoption across the color line generates intese controversy, and census takers struggle to classify multiracial citizens. With candor and compassion, Moran confronts such emerging issues in her account of the ongoing struggle to make freedom and equality a reality in private life. Interracial Intimacy—with its exploration of the complicated interplay of race and romance, the challenge of forging family ties across the color line, and the gowing visibility of multiracial Americans—reveals that even today, interracial relationships remain fragile arrangements poised between a history of pervasive segregation and a hope of personal transcendence.