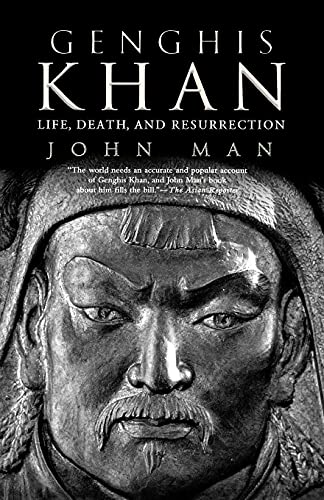 Quantity: 1
View all  copies of this book
Buy Used
Price: US$ 4.68 Convert Currency
Shipping: US$ 5.00 Within U.S.A. Destination, rates & speeds
Add to basket

Genghis Khan is one of history's immortals, alive in memory as a scourge, hero, military genius and demi-god. To Muslims, Russians and westerners, he is a murderer of millions, a brutal oppressor. Yet in his homeland of Mongolia he is the revered father of the nation, and the Chinese honor him as the founder of a dynasty. In his so-called Mausoleum in Inner Mongolia, worshippers seek the blessing of his spirit. In a supreme paradox, the world's most ruthless conqueror has become a force for peace and reconciliation.

As a teenager, Genghis was a fugitive, hiding from enemies on a remote mountainside. Yet he went on to found the world's greatest land empire and change the course of world history. Brilliant and original as well as ruthless, he ruled an empire twice the size of Rome's until his death in 1227 placed all at risk. To secure his conquests and then extend them, his heirs kept his death a secret, and secrecy has surrounded him ever since. His undiscovered grave, with its imagined treasures, remains the subject of intrigue and speculation.

This is more than just a gripping account of Genghis' rise and conquests. John Man uses first-hand experiences in China and Mongolia to reveal the khan's enduring influence. He has traveled the length of the empire. He spotlights the tension between Mongols and Chinese, who both claim Genghis' spirit. He is the first writer to explore the hidden valley where Genghis is believed to have died, and one of the few westerners to climb the mountain where he was likely buried.

This stunning narrative paints a vivid picture of the man himself, the places where he lived and fought, and the passions that surround him still. For in legend, ritual and intense controversy, Genghis lives on.

The creator of the world?s greatest empire is one of history?s immortals. He is also at the heart of one of the greatest mysteries -- how and where was he buried? Its solution might, conceivably, reveal a treasure on a scale not seen since the discovery of Tutankhamen?s tomb.