Items related to Floods, Famines, and Emperors: El Nino and the Fate... 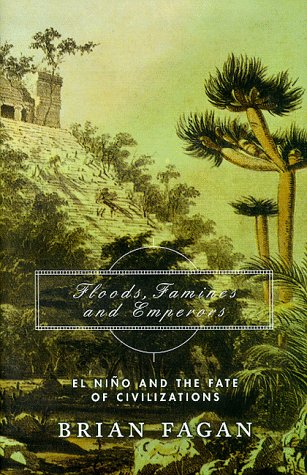 Floods, Famines, and Emperors: El Nino and the Fate of Civilizations

In 1997 and early 1998, one of the most powerful El Nińos ever recorded disrupted weather patterns all over the world. Europe suffered through a record freeze as the American West was hit with massive floods and snowstorms; in the western Pacific, meanwhile, some island nations literally went bone dry and had to have water flown in on transport planes.Such effects are not new: climatologists now know the El Nińo and other climate anomalies have been disrupting weather patterns throughout history. But until recently, no one had asked how this new understanding of the global weather system related to archaeology and history. Droughts, floods, heat and cold put stress on cultures and force them to adapt. What determines whether they adapt successfully? How do these climate stresses affect a people's faith in the foundations of their society and the legitimacy of their rulers? How vulnerable is our own society to climate change?In this dazzlingly original new book, archaeologist Brian Fagan shows that short-term climate shifts have been a major—and hitherto unrecognized—force in history. El Nińo-driven droughts have brought on the collapse of dynasties in Egypt; El Nińo monsoon failures have caused historic famines in India; and El Nińo floods have destroyed whole civilizations in Peru. Other short-term climate changes may have caused the mysterious abandonment of the Anasazi dwellings in the American Southwest and the collapse of the ancient Maya empire, as well as changed the course of European history.This beautifully written, groundbreaking book opens a new door on our understanding of historical events.

Before 1997, the name "El Nińo" was unknown to most ordinary folks. Meteorologists, oceanographers, commercial fishers, and weather buffs knew of this periodic climatic anomaly, but to the everyday person on the street, a few degrees' difference in the Pacific Ocean's temperature was irrelevant. Then one of the most powerful El Nińos in recorded history caused bitter freezes in Europe, brutal snowstorms and floods in western North America, and deadly droughts throughout the South Pacific. People sat up and took notice as a relatively tiny change in oceanic temperature resulted in death and destruction in many parts of the globe.

Brian Fagan examines the social effects of El Nińo and other powerful weather phenomena in Floods, Famines and Emperors. He gives plenty of examples of how cultures have adapted to stressful weather and the ways in which climatic alterations have changed the course of history. From droughts in ancient Egypt to monsoons in India, the far-reaching effects of meteorology's most cantankerous kid have deeply affected the way humans live in the world. Illustrated with useful maps and diagrams, Floods, Famines and Emperors is a clear, fascinating look at an aspect of climate studies--and of El Nińo--mostly ignored by science. --Therese Littleton