Items related to Yiddishe Mamas: The Truth About The Jewish Mother 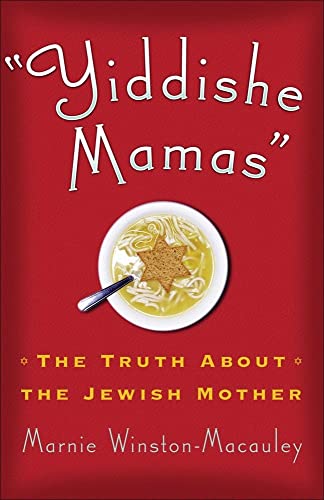 Yiddishe Mamas: The Truth About The Jewish Mother

Quantity: 1
View all  copies of this book
Buy New
Price: US$ 14.00 Convert Currency
Shipping: US$ 4.00 Within U.S.A. Destination, rates & speeds
Add to basket

Title: Yiddishe Mamas: The Truth About The Jewish ...

The Jewish mother feels her job isn't done even after death. You're never too dead to be a Jewish mother." --Mallory Lewis, daughter of Shari Lewis

* What do Steven Spielberg, Woody Allen, Barbra Streisand, Jon Stewart, Bette Midler, and Natalie Portman have in common with this book? A Jewish mother.

Is there such a thing as a Jewish mother? And if so, who is she? For the first time, best-selling Jewish author and humorist Marnie Winston-Macauley examines all aspects of the Jewish mother. Chronicling biblical Jewish mothers to modern-day Yentls, she creates a compendium using celebrity interviews, anecdotes, humor, and scholarly sources to answer these questions with truth and humor.

* "The definitive source on Jewish mothers." --Eileen Warshaw, Ph.D., executive director of the Jewish Heritage Center of the Southwest

We've all heard them. The Jewish mother stereotypes, borne of ridicule, heightened by Borscht belt comics, portrayed in media. And so, we have become the "cartoon." The prototype of the overzealous, over-involved, over-worried, over-protective, over-nurturing, over-bearing presence that has invaded popular culture.

In every stereotype, there is an element of truth. I recall my late mother ripping the heads off photos of boys who dumped me. My grandmother's entire reason for living after the death of my grandfather, was "to move in" - with us. From her mission came stories and anecdotes only a Carl Reiner could write

Yes, my grandmother sounded selfish. But then we look beyond at Gram. A woman who bribed border guards to get to America before the Nazis took over, leaving her birth family behind - forever.

This is why I needed to look before the period, at the backgrounds, religion, and principles of these women. The joke had a predecessor. And without examination, the meaning - and truth - is lost.

Many Jewish Mother stereotypes are about intrusion, child-first suffocation, lack of boundaries. Yet these "traits" are also the very qualities: protection, education, nourishment and survival, during pogroms, throughout the Holocaust and other incalculable calamities, that have kept us alive and intact these 5,000 years.

In this work, I hope you will see the special soul of Jewish motherhood through the sacrifices, the extraordinary belief in the future through our children that Jewish women over the centuries have possessed. You will also read fascinating facts, anecdotes and yes, humor that was vital and kept us going while we were running - always running. Jewish women, simply - are funny.