Items related to The Rescue 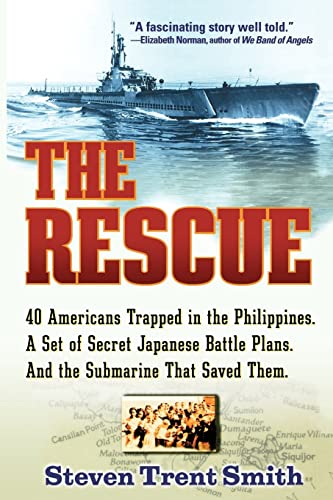 Praise for The Rescue

""Steven Trent Smith grapples boldly with several big subjects: the Japanese occupation of the Philippines; the capture of Japan's 'Z Plan' (the decisive-battle strategy for destroying the U.S. Pacific Fleet); the rescue by submarine of forty Americans stranded in the Philippines; the climactic Battle of the Philippine Sea. Meticulously researched and well written, The Rescue ties these elements together into an epic that is emotionally engaging from start to rousing finish.""
-Martin Russ, author of Breakout and The Last Parallel

""Smith's thoroughly researched, detailed account of the brave American and Filipino guerrillas on Negros Island in the Philippines will do much to introduce readers to this little known aspect of World War II in the Pacific. . . . This is a fascinating story well told.""
-Elizabeth Norman, author of the award-winning We Band of Angels: The Untold Story of American Nurses Trapped on Bataan by the Japanese

""The Rescue is a delightful journey with the gallant few who resisted the Japanese occupation of the Philippines and who shaped the larger events wh ich led to victory in the Pacific. Smith's brilliant research and unique storytelling make this account a must for all who enjoy history and a grand adventure.""
-Peter Huchthausen, author of October Fury

""With a photojournalist's eye for action and detail, Steven Trent Smith's The Rescue is a remarkable achievement. The incredible mission to save forty Americans stranded in the Philippines reads more like a work of fiction. . . . A must-read for all those interested in one of the great secret submarine operations of World War II and all action adventure fans alike!""
-Richard P. Henrick, author of Crimson Tide and Nightwatch

By 1944, forty Americans?missionaries, escaped POWs, and sugar planters?had endured nearly three years of hell while hiding from the Japanese in the mountains of the central Philippines. They had moved frequently from one primitive hideout to the next, always in danger, subsisting on what little the locals could spare. They had seen friends and family captured, even murdered. And their faith in God, their country, and themselves had been stretched to the breaking point.

Then word came that MacArthur was sending a submarine, the Crevalle, to save them. The refugees confronted what they hoped would be their final trial: a hundred-mile trek south to meet the sub, a trek that would take them through dense jungle and trackless swamps with the Japanese an ever-present threat and the knowledge that one false step could result in tragedy.

But the refugees had no idea their dramatic rescue was just a cover for a mission of great strategic importance.

As MacArthur and Nimitz pushed the Japanese back, island by island, they put to flight Admiral Koga Mineichi, Yamamoto?s successor and the commander of Japan?s powerful Combined Fleet. Koga carried with him the detailed plans for the imperial navy?s long-planned "decisive battle" at sea. But his plane crashed and the plans washed up on a Philippine beach. Thanks to the courage of two fishermen, the secret papers soon found their way to an extraordinary American guerrilla leader, who then risked everything to get them to the rendezvous with the Crevalle.

But would the Crevalle reach the plans and the refugees before the Japanese caught wind of the scheme? The Crevalle and her heroic crew would first have to sail through enemy-infested waters to reach the island. And even if they made it, would the sub successfully pick up its precious cargo, then survive the 1,500-mile journey to Australia and freedom?

A cross between the bestselling Blind Man?s Bluff and the award-winning We Band of Angels, Steven Trent Smith?s The Rescue is an unforgettable account of this daring mission, a relentless personal drama, and a masterpiece of military history.