Items related to Out at Work: Building a Gay-Labor Alliance 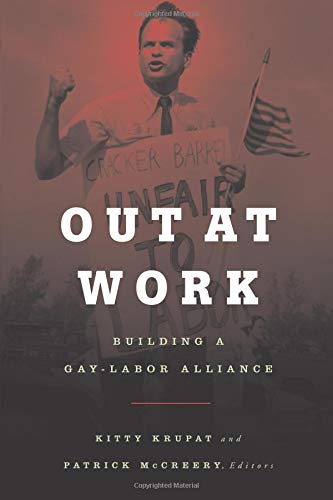 Out at Work: Building a Gay-Labor Alliance

Title: Out at Work: Building a Gay-Labor Alliance

Challenging the gay rights movement and labor unions to join forces in order to advance workplace rights for all.

Today in thirty-nine states, employers may legally fire workers simply because they are known or thought to be gay. Clearly, the struggle against workplace discrimination based on sexual orientation has a long way to go. In Out at Work, a distinguished group of prominent gay rights activists, union leaders and members, policymakers, and academics-including U.S. Representative Barney Frank, AFL-CIO president John J. Sweeney, and rights advocate Urvashi Vaid-offers a spirited assessment of the challenges faced by lesbians, gays, and other sexual minorities on the job.

Although mainstream gay rights organizations have tended to imagine their community as primarily middle class, an overwhelming number of lesbians and gays are working class, and many are already union members. Indeed, most of the progress made toward improved workplace conditions for gays and lesbians has been accomplished by rank-and-file union activists. Out at Work identifies the important parallels between the labor and gay rights movements and their shared work of foregrounding human rights, fighting homophobia, and embracing the full range of sexual expression. Through case studies of organizing efforts and more broadly political approaches, the authors call for both movements to reexamine their priorities and practices. There is much to be gained from a partnership between these movements, they conclude: for the gay rights movement, having the bargaining power of the trade unions behind them; for organized labor, a broader base of support.

Kitty Krupat and Patrick McCreery are contributors to this volume and doctoral candidates in the American Studies program at New York University.