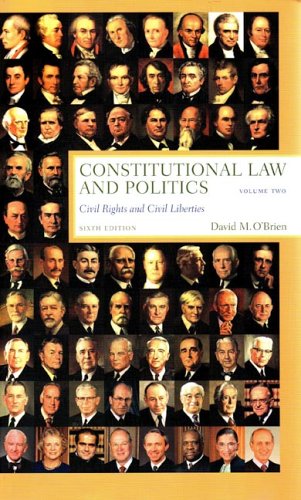 Quantity: 1
View all  copies of this book
Buy Used
Price: US$ 25.00 Convert Currency
Shipping: US$ 4.00 Within U.S.A. Destination, rates & speeds
Add to basket

Constitutional Law and Politics, Eighth Edition, has more material—including case excerpts, concurring and dissenting opinions, and topical introductions—than any other casebook. Each case is set in its historical and political context, with social and technological factors relevant to the study of Supreme Court rulings noted throughout. Special feature boxes make constitutional law come alive with additional insights on the history, context, and personalities behind Supreme Court deliberations and decisions.

David M. O'Brien is Leone Reaves and George W. Spicer Professor at the Woodrow Wilson Department of Government and Foreign Affairs at the University of Virginia. He received his Ph.D., M.A., and B.A. degrees in philosophy and political science from the University of California at Santa Barbara and is the author of numerous books, including Constitutional Law and Politics and Storm Center: The Supreme Court in American Politics, winner of the American Bar Association's Silver Gavel Award.