Items related to This Organic Life: Confessions of a Suburban Homesteader 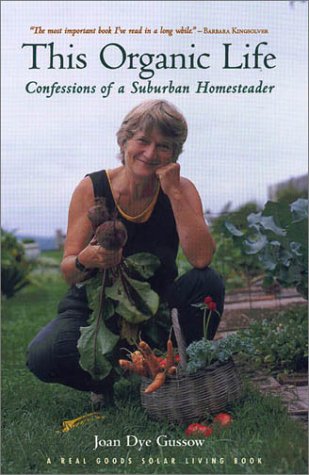 This Organic Life: Confessions of a Suburban Homesteader

Title: This Organic Life: Confessions of a Suburban...

Joan Dye Gussow is an extraordinarily ordinary woman. She lives in a home not unlike the average home in a neighborhood that is, more or less, typically suburban. What sets her apart from the rest of us is that she thinks more deeply--and in more eloquent detail--about food. In sharing her ponderings, she sets a delightful example for those of us who seek the healthiest, most pleasurable lifestyle within an environment determined to propel us in the opposite direction. Joan is a suburbanite with a green thumb, with a feisty, defiant spirit and a relentlessly positive outlook.

At the heart of This Organic Life is the premise that locally grown food eaten in season makes sense economically, ecologically, and gastronomically. Transporting produce to New York from California--not to mention Central and South America, Australia, or Europe--consumes more energy in transit than it yields in calories. (It costs 435 fossil fuel calories to fly a 5-calorie strawberry from California to New York.) Add in the deleterious effects of agribusiness, such as the endless cycle of pesticide, herbicide, and chemical fertilizers; the loss of topsoil from erosion of over-tilled croplands; depleted aquifers and soil salinization from over-irrigation; and the arguments in favor of "this organic life" become overwhelmingly convincing.

Joan's story is funny and fiery as she points out the absurdities we have unthinkingly come to accept. You won't find an electric can opener in this woman's house. In fact, you probably won't find many cans, as Joan has discovered ways to nourish herself, literally and spiritually, from her own backyard. If you are looking for a tale of courage and independence in a setting that is entirely familiar, read her story.

A highly acclaimed nutritionist whose work has been published in Country Journal and Annals of Earth, Joan Dye Gussow is living testimony that eating well year-round from an average-sized lot in the suburbs of Piermont, New York, is both possible and desirable. To live this civilized version of "the good life" involves no sacrifice of variety or taste, and only enhances life's sensual pleasures and one's mental outlook.