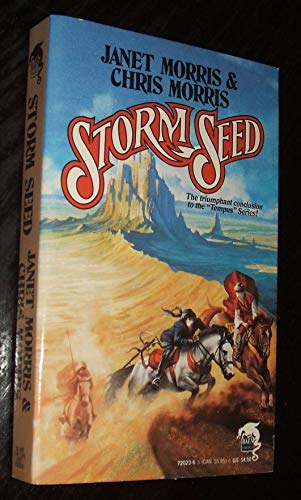 Quantity: 1
View all  copies of this book
Buy Used
Price: US$ 5.99 Convert Currency
Shipping: US$ 3.79 Within U.S.A. Destination, rates & speeds
Add to basket

Most of our used books are in good to very good condition with some wear from age or use. Seller Inventory # 003286

Tempus and Niko reunite the members of the Sacred Band for a perilous mission into the desert world of Sandia, but their quest is threatened by dark echoes from the past

The final "lost" volume of the iconic Sacred Band series in an all-new Authors' Cut edition..High adventure awaits.Travel with the Sacred Band of Stepsons to a future undreamed. Tempus the Black, avatar of the Storm God, and his partner Niko reunite the Sacred Band for a mission to a dying world. And from there -- should the gods allow -- to mystical Lemuria..-- Praise for the Sacred Band series:
.
"Janet Morris, Tempus (1987), and, with Chris Morris, Tempus Unbound (1989), The Sacred Band (2010).
"A fantasy series about the Sacred Band of Stepsons, an elite army modeled on the fourth-century B.C.E. Sacred Band of Thebes. The stories explore the fraught personal relationships of mixed hetero- and homosexual troops, only sometimes paired, as they fight for their commander, the immortal Tempus. Morris includes archaeological and historical details, from physical items to social practices, religion, and philosophy, to create a fantasy world that is, in many ways, more historically accurate than many popular accounts of antiquity." -- Robert W. Cape, Jr, in Classical Traditions in Science Fiction, Brett M. Rogers & Benjamin Eldon Stevens, eds., Oxford University Press