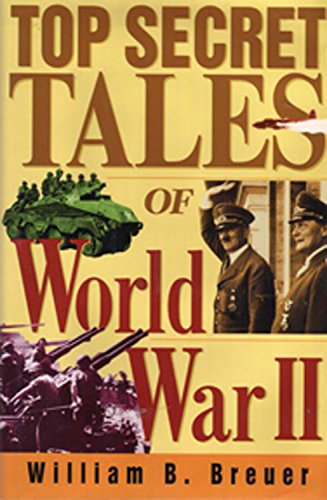 Espionage, in all its forms, as it evolved in the hands of both Allied and Axis agents of intelligence and counter-intelligence is the basis for these fascinating and ultimately disturbing stories.

Winston Churchill once remarked that the secret warfare waged in World War II equaled "the most fantastic inventions of romance and melodrama."

William Breuer vividly confirms that assessment with these compelling accounts of Allied and Axis intelligence throughout World War II. Here are riveting tales of patriotism and treachery, saboteurs, sleepers, and moles, giving fresh perspectives on the best-known interceptions and deceptions of the war—the breaking of the German code Enigma and the Japanese code Purple, Operation Overlord’s successful disguise of the D-Day invasion— as well as little-known feats of civilian bravado in the face of danger.

Meet Sidney Cotton, a British businessman and aviator who took the Luftwaffe’s General Albrecht Kesselring aloft for a test flight at a German air show and then coolly snapped valuable reconnaissance photographs after handing the controls over to the Nazi officer.

Shadow the covert armada that shipped the foundation of Great Britain’s financial security—including $2.5 billion in gold—from London to the Bank of Canada in Ottawa, without suffering a single loss from U-boats at the height of the Battle for the Atlantic.

Discover how U.S. taxpayers footed the bill for a successful Nazi propaganda effort that was documented in the Congressional Record, published by the Government Printing Office, and mailed on a congressman’s postal privileges.

Witness a German military spy so inept he carried his World War I medals on his mission, and another so bold that he advertised for industry secrets in the pages of Popular Aviation magazine. He paid twenty dollars each for the numerous—and significant—replies that poured in.

This war was fought by soldiers out of uniform. Stealth and ingenuity were their weapons. Victory was their only code of conduct."Gentlemen do not read each other’s mail."—Henry L. Stimson

Henry L. Stimson, the U.S. Secretary of War under President Franklin Roosevelt, was in for a rude shock as the military forces of Germany and Japan armed themselves for their assault on the world. Men at war not only read each other’s mail; they forged it whenever possible.

In Top Secret Tales of World War II, noted military historian William Breuer documents espionage—in all its forms—as it evolved in the hands of both Allied and Axis agents of intelligence and counter-intelligence. He reveals the acts of subversion and sabotage, the bribes, blackmailings, kidnappings, assassinations, grand deceptions, and bizarre assaults that were conducted in the name of victory at all costs.

Focusing on the fascinating characters that played key roles in these pivotal incidents, Breuer brings a fresh dimension to the war’s most notorious acts and provides new insights into missions conducted in such deep shadow they nearly eluded the history books as well as they did the enemy’s detection.