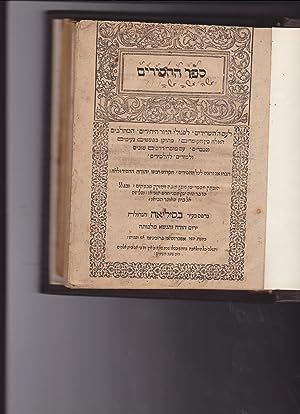 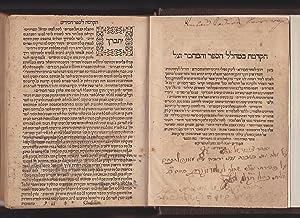 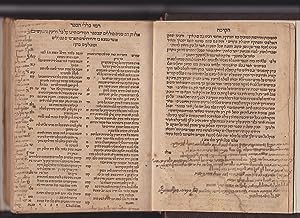 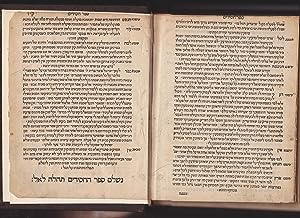 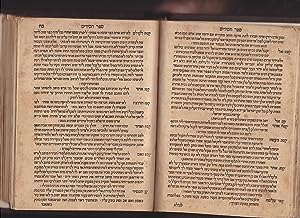 Title within decorative typographical border, title word within decorative woodcut frame. Some browning and staining. (4), 116 leaves. Apparently a made up copy since last section has shorter leaves. Leaves (4) and 1 to 48 are 188 x 146 mm. Leaves 49 to 116 are 184 x 146 mm. Rough translation of Hebrew inscription on verso of title page: The anniversary of the death of my father, of blessed memory Over these do I weep and shed tears and cannot be consoled over the death of my father who left this world and was buried on Monday, the 4th day in the month of Kislev in the year [5]533 [= 30 November 1772] [In the same handwriting but different ink:] The anniversary of the death of my mother and teacher. You died and were buried on Thursday, the 21st day of Adar [?] [5]532 [= 25 February 1772]. OCLC: Libraries worldwide that own item: 6. References: Steinschneider, Cat. Bodl.,; 5701 (2); Wiener, Kohel. Mos., 4311; Roest, p. 616. Many of the passages in Sepher HaChassidim are homiletic and exegetic, explaining the philosophical or mystical meanings of Biblical verses and Talmudic sayings. Nonetheless, it is primarily a masterwork of ethical instruction, enjoining how to resist temptation and avoid sin; how to dress, speak, pray and work; how to choose a wife and select companions; how to harmonise the necessities of existence with the requirements of religious life; how to choose a righteous teacher, and many other subjects. No other Hebrew work of ethics devotes such close attention to details, rendering it an important historical source for the study of everyday Jewish life in medieval Germany. For an extensive treatment of Ashkenazic Pietism, see I Marucs, Piety and Society: The Jewish Pietists of Medieval Germany (1981). See also H. Soloveitcheck, "Three Themes in Sefer Hasidim," AJS Review I (1976) pages 311-357. Sefer Hasidim," is truly representative of the teachings of the German pietists (Hadisei Ashkenaz). H. Soloveitchick, "Piety, Pietism and Germany Pietism: Sefer Hasidim I and the Influence of Hasidei Ashkenaz." JQR, XCII, numbers 3-4 )2002), pages 455-493. Major work in the field of ethics, produced by the Jews of medieval Germany. It comprises the ethical teachings of the Hasidei Ashkenaz movement in the 12th and early 13th centuries. Many of the passages in Sefer Hasidim are homiletic and exegetic in nature, explaining the ethical, and sometimes the philosophical or mystical, meanings of biblical verses or talmudic sayings. Most of the passages, however, discuss only ethics, and do so in direct connection with everyday life. Sefer Hasidim is the prime example of pragmatic and realistic ethical teachings in Jewish ethical literature; it takes into account the special characteristic of every case, the psychology of the person discussed, the historical and economic situation, and the person's special relationship to other people. This approach renders Sefer Hasidim the most important historical source for the study of everyday Jewish life in medieval Germany; it throws light especially on economic and religious relations of Jews with gentiles. The book has some descriptions of actual incidents, clarifying the situation in Germany during and after the disasters brought by the crusaders on Jews in Germany and France. Later Jewish ethical works influenced by Sefer Hasidim retained its strict and uncompromising adherence not only to the commandments, but to the entire body of religious ethics. The book instructs the pious man how to resist temptation and avoid any situation which may lead to sin. It teaches how to dress, to speak, to pray, to work, and to sleep; how to choose a wife and to select friends; how to harmonize between the necessities of existence and the requirements of religious life; which city is suitable for a pious person to live in and which is not; the right relationship between teacher and pupil; how to choose a righteous teacher; in what fields one may have commercial contact with gentiles etc. Seller Inventory # 005808