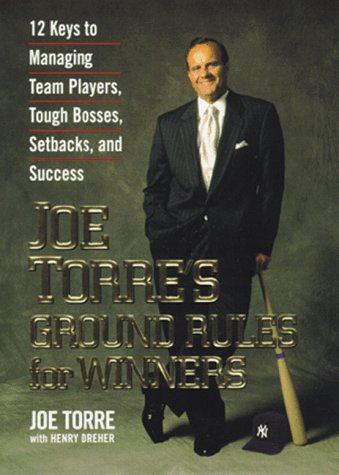 Just when baseball was desperately in need of a hero, along came Joe Torre, the unflappable manager of the New York Yankees, who led North Americas favourite team to two world championships and the best single-season record in the history of the game. When Torre first took the helm in 1996, he was much like any employee with a high-pressure job; he had to contend with a record of recent failures, team infighting, outsized egos, and a notoriously difficult boss. Within months, he had implemented a winning formula for team chemistry, hard work, good spirits, and a workable relationship with his tough boss. In the tradition of the bestselling Success Is a Choice, by Rick Pitino and the extraordinary Raise the Roof by Pat Head Summitt, Torre divulges his 12 keys to managerial success. His invaluable advice and management methods apply just as well off the field as they do on and will motivate almost anyone to perform better. With entertaining stories from his experiences with the always colourful Yankees, he describes his strategies, including specific communication skills, the small bites approach, trust and respect toward team players, and a style of serenity and optimism. Joe Torre is a unique role model, a leader who projects an image of integrity, equanimity, and fairness. Sports enthusiasts, as well as executives, employees, and anyone faced with the challenge of managing people, will be enlightened and inspired by this guide to winning in the business world and in life. Joe Torre clinched his second World Series as the manager of the New York Yankees in 1998, making him the toast of New York. Henry Dreher is a New York-based writer who specializes in health and self-help. He has authored many books, as well as magazine articles and corporate speeches.

Joe Torre clinched his second World Series as the manager of the New York Yankees in 1998, making him the toast of New York and the baseball world. He also managed and played for the Atlanta Braves, the New York Mets, and the St. Louis Cardinals, playing in the All-Star Game nine times. He won Manager of the Year awards in both 1996 and 1998.

Henry Dreher is a New York-based writer who specializes in health, psychology, and self-help. He has authored many books, as well as magazine articles and corporate speeches.