Items related to A Nation Challenged: A Visual History of 9/11 and Its...

Home A Nation Challenged: A Visual History of 9/11 and Its Aftermath
Stock Image 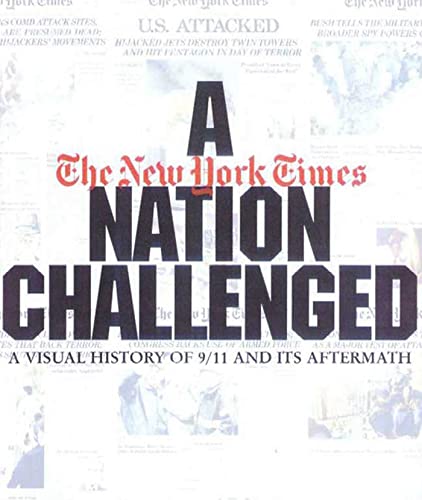 A Nation Challenged: A Visual History of 9/11 and Its Aftermath

Title: A Nation Challenged: A Visual History of 9/...

A powerful and eye-filling photographic chronicle of the award-winningNew York Times's coverage of 9/11 and its aftermath worldwide, including the war in Afghanistan

In an unprecedented effort, The New York Times opens its picture archive of September 11th and the aftermath at home and abroad. The result is groundbreaking photojournalism punctuated with authoratative prose. Culled from both published and previously unpublished material, A Nation Challenged highlights the best work of the paper's award-winning staffers-the work that has made the Times the paper of record for these events.

With a foreword, afterword, and original background essays by writers such as Pulitzer Prize winner John Burns, N. R. Kleinfeld, Dan Barry, and Celestine Bohlen, readers will follow the stunning events of September 11th on the national and international stage. Special charts and graphics supply another level of clarity and understanding, while the brilliant photographs provide counterpoint and perspective to carefully chosen text.

With 250 full-color photographs, A Nation Challenged is the definitive volume for all who desire a comprehensive visual chronicle of this pivotal time in America's history.

Nancy Lee was formerly the picture editor of the Times and the head of Photo Archives. She is currently is the vice president of business development of the News Services division.

Lonnie Schlein was named Metro photo editor of the Times on September 10th. Since 1991 he had been National photo editor.

Mitchel Levitas, editorial director of book development since 1995, previously was the editor of the Op-Ed page, the Sunday Book Review and the "Week in Review."