Items related to The Silent Blade 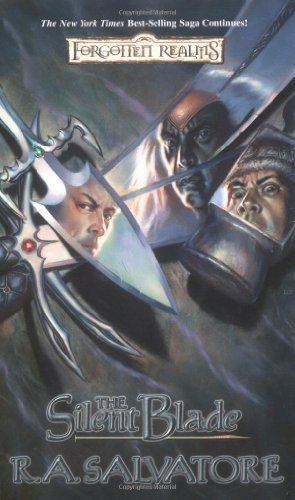 When the vile Crystal Shard once again reveals itself, Drizzt must race against his most formidable enemies in hopes of destroying it before it finds the one being that can help it enslave the world: a dark elf named Jarlaxle.

Winner of the Origins Award for best game-related novel of 1998, The Silent Blade marked the return of Drizzt to the wind-swept tundra of the Forgotten Realms world. This deluxe reissue features a new Todd Lockwood cover and an introduction from The New York Times best-selling author Philip Athans, who has served as Salvatore's editor for almost a decade, starting with the original release of this book.
From the Hardcover edition.

Everybody's favorite introspective dark elf butt-kicker is back. And if you're one of the many fans of R.A. Salvatore's phenomenally popular twin-scimitar-swinger, you won't be disappointed. The Silent Blade is old-school Drizzt, an adventure that brings together the original gang: the lovely Cattie-brie, the plump and mischievous Regis, the gruff dwarven father-figure Bruenor, and the even more gruff barbarian hammer-hurler Wulfgar. Better yet, The Silent Blade brings back Drizzt's best worst nemesis, master assassin Artemis Entreri. Throw in the evil artifact Crenshinibon (a.k.a. the Crystal Shard, the namesake of the first Drizzt Do'Urden book), and you know you're in for a good time.

The plot follows three intertwined threads: Drizzt and Co.'s road trip to destroy Crenshinibon, Wulfgar's struggle to overcome the scars of his imprisonment at the claws of the demon Errtu, and Artemis Entreri's long-awaited return to the seamy streets of Calimport. The action is as lively as ever, with giants and goblins and thieves all getting their deserved lumps at the hands of our heroes, and of course Drizzt continues his meditations on life with a capital L. The book's highlight, though, comes when Do'Urden and Entreri cross paths once again, this time with surprising results. And the promise of that matchup should keep you flipping the pages quickly. --Paul Hughes