Items related to Encyclopedia of Jewish Humor: From Biblical Times to...

Home Encyclopedia of Jewish Humor: From Biblical Times to the Modern ...
Stock Image 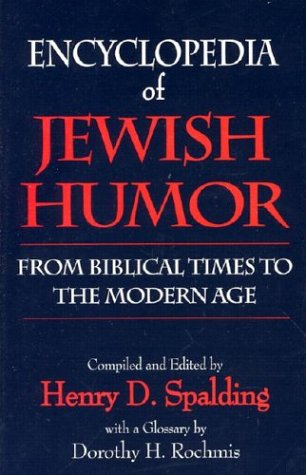 Encyclopedia of Jewish Humor: From Biblical Times to the Modern Age

Quantity: 1
View all  copies of this book
Buy Used
Price: US$ 9.00 Convert Currency
Shipping: US$ 4.00 Within U.S.A. Destination, rates & speeds
Add to basket

Hundreds of colorful, witty, and downright hilarious stories, anecdotes, quips, jokes, and yarns reflect and poke fun at Jewish culture from ancient times to the present.

A native of New York City, Henry D. Spalding began his career in journalism as a reporter for the New York Mirror and the Journal. While a member of the National Press Club in Washington, D.C., he was an accredited White House correspondent.

In the 1950s Spalding moved to Los Angeles, where he was active as editor and publisher of Deejay, Disc, and Top Ten-all music magazines-as well as Talent News, a show-business trade journal.

When Encyclopedia of Jewish Humor was first published in 1969, it was received enthusiastically, and has since gone through many editions. That, together with the author's Treasure-Trove of American Jewish Humor, Encyclopedia of Black Folklore and Humor, Joys of Irish Humor, and Joys of Italian Humor, have established Henry Spalding as one of the world's leading experts on ethnic humor.