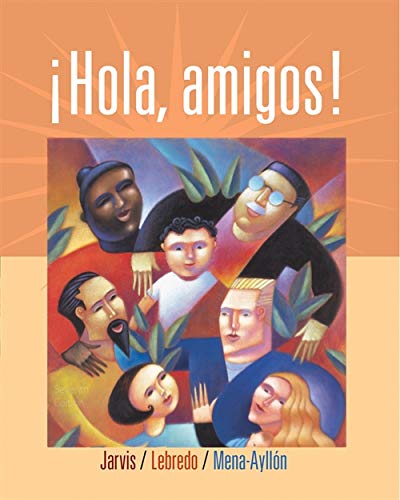 Quantity: 1
View all  copies of this book
Buy Used
Price: US$ 67.47 Convert Currency
Shipping: US$ 5.00 Within U.S.A. Destination, rates & speeds
Add to basket

This highly accessible, manageable program is user-friendly for instructors, teaching assistants, and students. Known for its succinct and precise grammar explanations, its presentation of high-frequency and practical vocabulary, and overall flexibility, Hola, amigos! continues to maintain its appeal with instructors regardless of their preferred methodology. The program is designed to develop students' ability to communicate effectively in Spanish in a variety of situations as well as to strengthen cultural awareness and competence. It offers a full scope and sequence, yet is brief enough to be used effectively for a two-semester course. The Seventh Edition features all-new art and video programs as well as enhanced integration and presentation of culture. All components are fully integrated with the flexibility to accommodate a range of scheduling factors, contact hours, course objectives, and ability levels.

Ana C. Jarvis, a native of Paraguay, was born in Asuncion and attended school in Buenos Aires, Argentina. She received her Ph.D. in Spanish from the University of California, Riverside, in 1973. Dr. Jarvis retired from Chandler-Gilbert Community College after a long and distinguished career. Prior to CGCC, she taught at Mesa Community College; the University of California, Riverside; San Bernardino Valley College; Brigham Young University; and Riverside City College. In addition to authoring numerous Spanish textbooks, she has published several short stories in Spanish. In 1988, she was chosen as "Faculty Member of the Year" at Chandler-Gilbert Community College.

Raquel Lebredo was born in Camaguey, Cuba. She attended school in Havana and later enrolled at the University of Havana, where she received a Ph.D. in Education. She was subsequently employed as an elementary school principal, and taught literature and language at a preparatory school in Havana. She moved to the United States after living in Spain for a period of time. Dr. Lebredo was awarded a Ph.D. in Spanish from the University of California, Riverside. Since then, she has taught Spanish at Claremont Graduate School, Crafton Hills College, the University of Redlands, and California Baptist University, and has authored several Spanish textbooks. In 1985, she was chosen as "Faculty Member of the Year" by the student body at California Baptist University, and in 1991 she received a YWCA "Women of Achievement" award.

Francisco Mena-Ayllon, a native of Madrid, Spain, received his Ph.D. in Spanish from the University of California, Riverside, in 1973. He has taught Spanish language and literature courses at the University of California, Riverside; Oberlin College; California State University, Chico; the University of Redlands; and Crafton Hills College. In addition to authoring numerous Spanish textbooks in the United States, he has published a book about Federico Garcia Lorca and several volumes of his own poetry. His poetry has been published in Spain, Latin America, and the United States. His work has also been included in several anthologies of contemporary Spanish poets, and he is listed in Quien es Quien en las Letras Espanolas, 1978 (Who's Who in Spanish Letters), as an important contributor to contemporary Spanish literature. Professor Mena-Ayllon is now retired.