Items related to Riding the Ox Home. Stages on the Path of Enlightenment 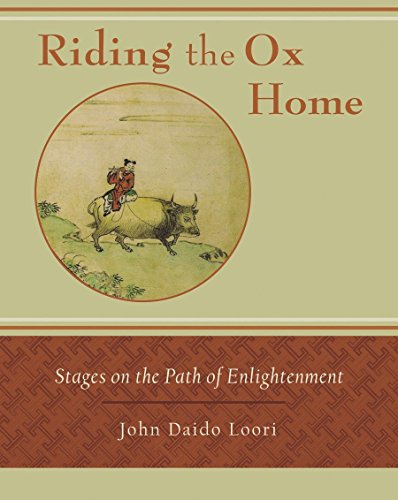 Riding the Ox Home. Stages on the Path of Enlightenment

Quantity: 1
View all  copies of this book
Buy Used
Price: US$ 10.06 Convert Currency
Shipping: US$ 32.19 From France to U.S.A. Destination, rates & speeds
Add to basket

Title: Riding the Ox Home. Stages on the Path of ...

Maps and guideposts are helpful when we undertake a journey. The ten Ox-Herding Pictures, the accompanying ancient poems, and a modern commentary by John Daido Loori, sketch the spiritual path encountered in Zen training, a path of exhaustive study of the self and the realization of the ultimate nature of reality. The Ox-Herding Pictures can be our companion on the Way of self-discovery, our compass and perspective when we need one. They are a bottomless source of mysterious wisdom to which we can return again and again for inspiration, and they translate easily into the gritty reality of spiritual practice that emerges from and grounds us in the inescapable relevance of our daily lives.

The exquisite versions of the pictures found in the book are traditional Chinese nanga brush paintings by Gyokusei Jikihara Sensei, a modern Japanese master of calligraphy and a teacher in the Obaku School of Zen. The traditional verses accompanying them have been translated by John Daido Loori and Kazuaki Tanahashi, translator and editor of Enlightenment Unfolds: The Essential Teachings of Zen Master Dogen.

John Daido Loori (1931–2009) was one of the West's leading Zen masters. He was the founder and spiritual leader of the Mountains and Rivers Order and abbot of Zen Mountain Monastery. His work has been most noted for its unique adaptation of traditional Asian Buddhism into an American context, particularly with regard to the arts, the environment, social action, and the use of modern media as a vehicle of spiritual training and social change. Loori was an award-winning photographer and videographer. His art and wildlife photography formed the core of a unique teaching program that integrated art and wilderness training by cultivating a deep appreciation of the relationship of Zen to our natural environment. He was a dharma heir of the influential Japanese Zen master Taizan Maezumi Roshi and he authored many books.