Items related to A Time to Lead for duty,honor. and country 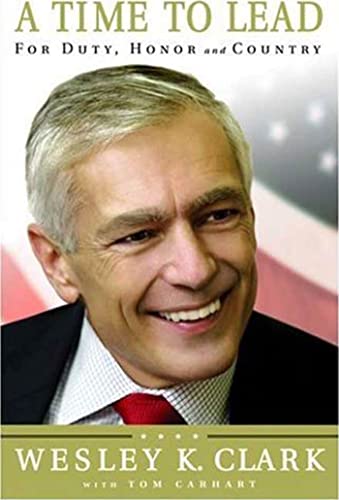 A Time to Lead for duty,honor. and country

Title: A Time to Lead for duty,honor. and country

Four-star General Wesley K. Clark became a major figure on the political scene when he was drafted by popular demand to run for the Democratic nomination for President of the United States in 2003. But this was just one of many exceptional accomplishments of a long and extraordinary career. Here, for the first time, General Clark uses his unique life experience―from his difficult youth in segregated Arkansas where he was raised by his poor, widowed mother; through the horror of Vietnam where he was wounded; the post-war rebuilding of national security and the struggles surrounding the new world order after the Cold War―as a springboard to reveal his vision for America, at home and in the world. General Clark will address issues such as foreign policy, the economy, the environment, education and health care, family, faith, and the American dream.
Rich with breathtaking battle scenes, poignant personal anecdote and eye-opening recommendations on the best way forward, General Clark's new book is a tour de force of gripping storytelling and inspiring vision.

General Wesley K. Clark served in the United States Army for thirty-four years and rose to the rank of four-star general as NATO's Supreme Allied Commander, Europe. He is author of the best selling books Waging Modern War and Winning Modern Wars. He lives in Little Rock, Arkansas. Tom Carhart holds a B.S. from West Point, two Purple Hearts from Vietnam, a J.D. from the University of Michigan Law School, and a Ph.D. in American and military history from Princeton University. The author of five military history books, his latest is Lost Triumph: Lee's Real Plan at Gettysburg--and Why It Failed. He lives in Northampton, Massachusetts.