Items related to Peerless Minds: An Arc of Achievement

Peerless Minds: An Arc of Achievement 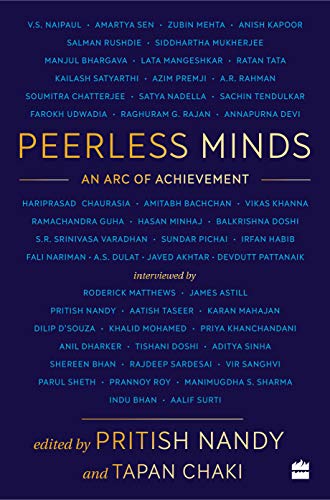 This book, edited by Pritish Nandy and Tapan Chaki, contains interviews of some of the finest minds of our time. Among others, there is Amartya Sen interviewed by James Astill; late V.S. Naipaul by Roderick Matthews, possibly the last interview he ever gave; Salman Rushdie by Aastish Taseer; Ratan Tata by Pritish Nandy; A.R. Rahman by Tishani Doshi; Amitabh Bachchan by Rajdeep Sardesai; Satya Nadella by Shireen Bhan; Sunder Pichai by Prannoy Roy and Devdutt Pattanaik by Pritish Nandy. A fascinating collection of long-form interviews, this book contains the thoughts and ideas of leaders who are constantly bringing change not just in India but across the world.

Pritish Nandy is a renowned editor and writer and has authored several collections of poetry. He received the Padma Shri at the age of twenty-six. He is also a film-maker and heads Pritish Nandy Communications.

Peerless Minds : An Arc of Achievement

Book Description Hardback. Condition: New. Language: English. Brand new Book. 'Peerless Minds brings together the finest minds that sustain India as a riveting and relentless idea. The exceptional life stories featured in this book reaffirm the truth that the luckiest of nations are the ones that continue to be rebuilt and reimagined by peerless minds.' S. PRASANNARAJAN, Editor, Open magazine Three Nobel Prize winners. Two Bharat Ratnas. Three Knights of the British Empire. A Pulitzer Prize winner. A two-time Best of the Bookers winner. An Abel Prize winner. A Pritzker Prize winner. A Fields Medallist. Two Fukuoka Prize winners. A Turner Prize winner. Two Praemium Imperiale recipients. A double Academy Award winner. Many Padma Vibhushans and Padma Bhushans. But that is not why these people are really here. They are here because they, as Indians and people of Indian origin, have had extraordinary achievements and have inspired, each in their own way, a generation of Indians. Here you will find, among others, economist Amartya Sen; authors V.S. Naipaul, Salman Rushdie; mythologist Devdutt Pattanaik; philanthropist Azim Premji; mathematician Manjul Bhargava; from the world of music, Annapurna Devi, Lata Mangeshkar and Zubin Mehta; industrialist Ratan Tata; sculptor Anish Kapoor; architect Balkrishna Doshi; spymaster A.S. Dulat; historian Irfan Habib; Michelin-starred chef Vikas Khanna; poet Javed Akhtar; and stand-up comic Hasan Minhaj. In conversation with them are authors and journalists such as James Astill, Prannoy Roy, Vir Sanghvi, Aatish Taseer, Shereen Bhan, Karan Mahajan, Rajdeep Sardesai, Khalid Mohamed, Priya Khanchandani, Indu Bhan and Anil Dharker. A fascinating collection of long-form interviews with some of the greatest minds and biggest achievers of our time, Peerless Minds is a book to be cherished and preserved. Seller Inventory # AA89789353023553

Shipping: US$ 4.83
From United Kingdom to U.S.A.
Destination, rates & speeds

PEERLESS MINDS A Celebration An Arc of Achievement

Shipping: US$ 0.60
From United Kingdom to U.S.A.
Destination, rates & speeds

Peerless Minds: An Arc of Achievement