Items related to Stories from the Blue Moon Cafe II: Anthology of Southern... 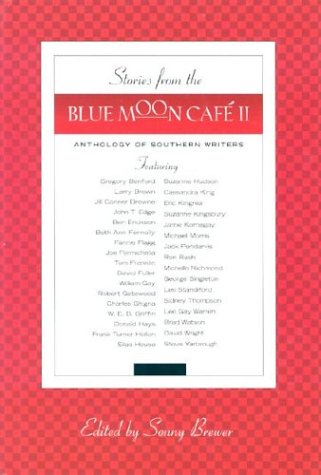 Presents a collection of short stories from such authors as Tom Franklin, Donald Hays, Suzanne Hudson, and Michelle Richmond.

From Publishers Weekly:
Eclectic, unpretentious and enjoyable, this collection of short stories, poetry and nonfiction is the second installment in the Blue Room Cafe series, edited by Brewer, owner of an Alabama bookstore and director of the annual literary event Southern Writers Reading. The majority of the book is high quality fiction, much of it by authors little known outside the Deep South. The opening story by Larry Brown, "A Roadside Resurrection," is a gritty tale of a dying man and a healer who is cursed by his gift for healing. In William Gay's "Homecoming," a man drops in on wealthy relatives and finds the rich have more problems than he ever imagined. In Michelle Richmond's "Choose Your Travel Partner Wisely," a woman finds out more than she wants to know about her husband during a tropical holiday. Another husband and wife grow apart in "Orphans," by Donald Hays, in which an Oklahoma dentist finds God and moves to Russia to found an orphanage, his skeptical wife trailing behind. The strong nonfiction entries include "My Heroes Have Always Been Grill Cooks: Rumination on William Price Fox's Southern Fried," by John T. Edge, an insightful piece presented in a style recalling Fox's famous staccato delivery. Among the poems, the most moving is David Fuller's "Linda Wahlthal," in which a man wonders whatever became of his first love. Brewer's anthology must compete for shelf space with other, longer-established series, but the pleasing array of fresh voices and discerning selection of material makes this a welcome alternative.
Copyright 2003 Reed Business Information, Inc.
From Booklist:
What makes a writer a southern writer? Is it a matter of geography or sensibility? Next to the question of what qualifies a novel as "literary," that may be the most popular rhetorical game in American letters. This anthology, with its unwieldy mix of tones, themes, and settings--some of the stories don't even take place in the American South--won't do much to settle the question. But it does offer readers the pure pleasure of short stories written by the South's best contemporary writers. The collection mixes work by such well-known authors as Fannie Flagg and W.E.B. Griffin, with stories from emerging writers, including 18-year-old Eric Kingrea. Flagg contributes a slight, comic tale, "Rome, Italy," which reads as if it flitted onto the page while she was lolling on the porch drinking lemonade. On a more ambitious note, Larry Brown leads off the collection with the sumptuously southern gothic tale "A Roadside Resurrection." Not every story is equally good, but readers should find their visit to the Blue Moon Cafe more than satisfying. Karen Holt
Copyright © American Library Association. All rights reserved

STORIES FROM THE BLUE MOON CAFE

Shipping: US$ 20.44
From United Kingdom to U.S.A.
Destination, rates & speeds