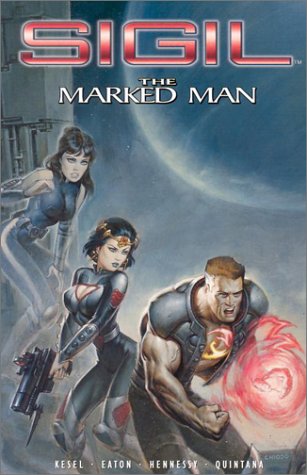 Samandahl Rey was a loner, a wandering ex-soldier whose sense of responsibility extended only to himself and to his friend, Roiya Sintor – until the Sigil was forced upon him, a brand of vast power that changed his destiny forever. Now the first daughter of Delassia needs his protection, his worst enemy is about to ask for his help, and the entire Planetary Union is depending on Sam to free its citizens from the tyranny of the vile, lizardlike Saurian race. Sam’s about to find he had no idea what the word ‘responsibility’ meant. SIGIL is a panorama of intergalactic fleet actions and strange, alien worlds. CrossGen’s only straight sci-fi series, Sigil is leavened with a spark of humor and romance that sets it apart from your typical space odyssey. >SIGIL V. 2: THE MARKED MAN - On the run from the Saurian Empire and Sam`s personal enemy, the Saurian Prince Tchlusarud, Sam and Roiya are heade `anywhere but here.` Tagging along is Zanniati, the runaway wife of the Sultan Ronolo of Tanipal, and JeMerik Meer, a member of the Sultan`s guard. They end up in Delassia, where they discover Zanni`s more than just a trophy wife, and Roiya discovers there's more to JeMerik than just a rouguish smile and good timing.

Born March 21, 1962 in Hueytown, Alabama, Mark Waid bought his first comic in 1966 at the beginning of TV's Batmania and has never once since entertained the notion of not buying comics. In 1987, Mark joined DC Comics as a staff editor and two years later left to pursue a full-time freelance career that spanned the 1990s and into the early 2000s. That period led to award-winning runs on The Flash for DC Comics and Captain America for Marvel Comics. In 1996, he co-created the Eisner award winning Kingdom Come at DC Comics. Since then, he has worked for every major comics publisher and has authored a broader range of well-known comics characters---including Superman, Batman, Spider-Man, the X-Men, and Archie---than any other writer in the history of the medium. With his encyclopedic knowledge of comics history, Mark also serves as an historian; he has published hundreds of articles and four books on the subject, and has fielded research questions from sources as diverse as Time, Variety, and the Library of Congress. Mark writes Ruse at CrossGen, nominated for a 2002 Harvey Award as Best Series and for Best Single Story, and for which Mark himself was nominated as Best Writer.