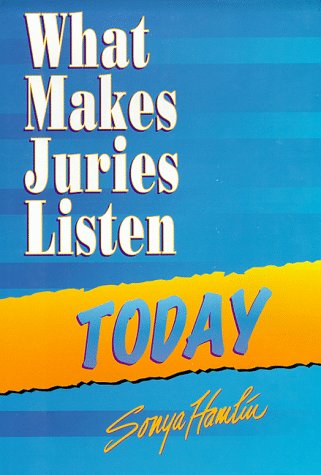 How you think, what you plan, what you'll tell and how you'll tell it must change to reach the new jury. This book is about how we are entering a new era of litigation and persuasion with major challenges posed by the various changes in jury makeup, needs and expectations but most of all, in how we communicate now.In the pages of this work, replete with over 100 illustrations, you will discover how to rethink the traditional ways you've always tried cases as well as what tools you'll use to persuade.

How Lawyers Have Used the Hamlin Techniques to Win Cases Including Million Dollar Verdicts and "No Cause" Verdicts...

-----I just finished a two-month jury trial involving fraud, bad faith and dissolution of partnership between blood relatives. After my Opening Statement, but fortunately during the trial, I bought your book, "What Makes Juries Listen".

I can't tell you how delighted I was with your suggestions and unique know-how. Frankly, I'm usually unimpressed by "how-to" books and I thought yours would simply confirm my own experiences.

Instead, you gave me a whole new slant on jurors. I found that many of my preconceptions were faulty. As the trial progressed, I read your book and began applying its lessons.

As I approached Closing Arguments, I used some of the few remaining hours to study your techniques. I incorporated some of your specific ideas and I avoided the pitfalls you had warned about. Remarkably, my opponent broke several of your rules and I could see the jury "turning off."

If you haven't already guessed, I won! The jury confirmed our clients' partnership rights and awarded $250,000 in compensatory damages and $1,250,000 in punitive damages.

Although I used many specific ideas from your book one general theme prevailed: Talk to jurors as people. Don't be afraid to ask for what you want. Explain why you believe the evidence justifies your getting what you want. Don't "guild the lily."...

------In opening statements and closing arguments, I used more of your ideas. I especially liked your suggestions to explain a little bit of why lawyers do what they do instead of launching directly into a discussion of the evidence. I used your suggestions to move about the courtroom instead of tying myself to the lectern. It helped me relax and I think it helped the jury listen.

I also noticed that my opponent droned on in a monotone. I took your suggestion to vary the pitch of my voice.

The result was wonderful; my first "no cause" verdict from a jury. Thanks again for your excellent book. I will use it again and again.

Sonya Hamlin is President of Sonya Hamlin Communications in New York City and the author of several best selling books, including What Makes Juries Listen, First Edition, which had ten printings. She is well-known to lawyers throughout the country as an expert in training trial advocates. A long-time television personality who won two Emmy awards in Boston, she first created her communications skills lecture-demonstrations and individual coaching sessions for the Harvard Law School.

Ms. Hamlin consults on cases and teaches at many law firms, bar associations and CLE programs. Her teaching credits include the ABA, ALI-ABA, the National Institute of Trial Advocacy, the Attorney General's Advocacy Institutes at the U.S. Department of Justice, and many law schools. She is a communications consultant to numerous major corporations, political institutions, colleges and the media. Ms. Hamlin served as jury expert on national network television for the O.J. Simpson case and for the Oklahoma City bombing trial.