Items related to My Love, My Country

Lee, Hee-ho My Love, My Country 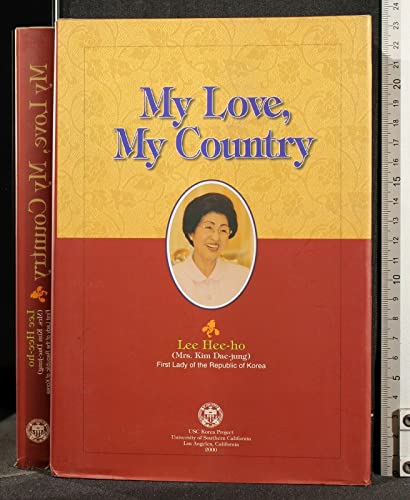 My Love, My Country **Signed**

Book Description Hardcover. Condition: Very good. Dust Jacket Condition: Very good. Presumed First Edition, First printing. xxvii, [1], 269, [1] pages. Illustrations. Inscribed and dated by the author on fep. Gold foil sticker affixed to fep stating "Presented by President of the Republic of Korea and Mrs. Kim Dae-jung." Lee Hui-ho (born 21 September 1922) was the First Lady of South Korea from 1998 to 2003. She is the widow of the 8th President of South Korea, Kim Dae-jung. Lee Hui-ho was born in Seoul on 21 September 1922, during the Japanese occupation of Korea. She graduated from Ewha Girls' High School, and graduated from Seoul National University in 1950. She married Kim Dae-jung in 1962. This is the story of a most remarkable family. The wife of Kim Dae-jung, President of South Korea, offers an account of her family's years spent at the mercy of successive dictators. Despite constant fear and oppression, the couple's overwhelming Christian faith enabled them to persevere. Kim Dae-jung, or Kim Dae Jung (6 January 1924 - 18 August 2009), was a South Korean politician who served as President of South Korea from 1998 to 2003. He was a 2000 Nobel Peace Prize recipient, the only Korean Nobel Prize recipient in history. He was sometimes referred to as the "Nelson Mandela of South Korea". In 1980, Kim was arrested and sentenced to death on charges of sedition and conspiracy in the wake of another coup by Chun Doo-hwan and a popular uprising in Gwangju, his political stronghold. He was given exile in the U.S. and temporarily settled in Boston and taught at Harvard University as a visiting professor to the Center for International Affairs. When he was sworn in as the eighth President of South Korea on 25 February 1998, it marked the first time in Korean history that the ruling party peacefully transferred power to a democratically elected opposition victor. Seller Inventory # 77454