Items related to The Shadow President: Ted Kennedy in Opposition 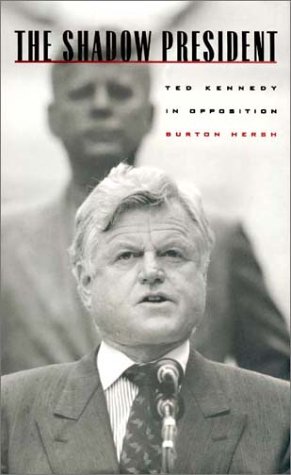 In the style of a biographical essay...an affectionate look at Kennedy, but a clear-eyed one.-- Boston Globe

Burton Hersh is a veteran writer on American politics and the author of The Education of Edward Kenney (1972), still the standard treatment of the seantor's early career. Hersh's other works include The Old Boys: The American Elite and the Origins of the CIA, and The Nature of the Beast, a striking novel about the lengths to which the CIA does go to manipulate what the political elite think is good for them.

How Ted Kennedy earned his reputation as a prodigious womanizer, drinker, and eater--and also, according to veteran Kennedy-watcher Hersh, as one of the most effective senators of our time. In this addendum to his 1972 biography (The Education of Edward Kennedy), Hersh chronicles 25 more years of Kennedy peccadillos and politics, but this time with a redemptive twist: Kennedy has allegedly gone straight, thanks to his 1992 marriage to Victoria Reggie, expedited by exhaustion from age (Jack and Bobby's baby brother became a senior citizen this year); repeated, scandal-driven, near-death political experiences; and liberation, at last, from the unwanted burden of being expected to run for president. Hersh labors not to appear to be writing an encomium to Kennedy, but despite the sordid details, that's what he ends up doing--not just because of his admiration of Kennedy's skills as a senator, but because he believes some mighty powerful demons drove Kennedy to his bad behavior. Ted was scorned as a lightweight by the older brothers he worshiped, and then had to live with the enormous expectations that came with being their survivor. His immediate family, living in constant fear that Ted would be the next to be assassinated, was plagued by alcoholism, drug abuse, and Teddy Jr.'s near-fatal cancer. And, like all the Kennedy brothers, Ted was scarred by having been raised in what many historians believe was a severely dysfunctional family. Hersh covers ground already well tilled in a multitude of chronicles of the Kennedy family, but his gruff, old-time journalistic style (``Ted Kennedy is larger than his appetites'' is one of his better-turned phrases) and the details of how Kennedy works the Senate, scoring remarkable victories for his liberal principles in a conservative era, make this a decent if unspectacular addition to the Kennedy canon. -- Copyright ©1997, Kirkus Associates, LP. All rights reserved.