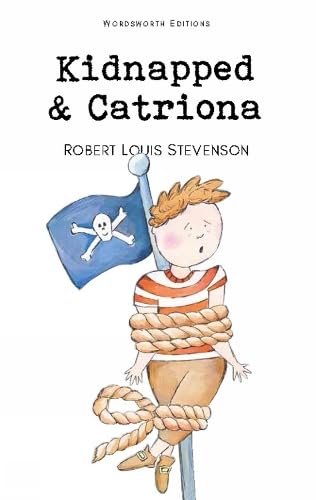 Set in Scotland in 1751, Kidnapped tells of how young David Balfour, orphaned, and betrayed by his uncle Ebenezer who should have been his guardian, falls in with Alan Breck, the unscrupulous but heroic champion of the Jacobite cause. Shipwreck, murder and escape through the Highlands are only a few of the ingredients of this wonderful book.

Robert Louis Stevenson always considered "Kidnapped," the tale of 17-year-old David Balfour's adventures in the remote islands and highlands of Scotland with renegade soldier Alan Breck Stewart, to be his greatest novel, but when the classic adventure tale was published in 1886, it was missing much of what its author held dear. His English publisher had excised many of the Scottish words and phrases he had used to evoke the suspense of the novel. From simple misreadings to deliberate revisions, subsequent printed editions represented major departures from Stevenson's handwritten text. Now Barry Menikoff has restored the author's language and punctuation, as well as the authentic Scots quality of his diction. In doing so, he has given readers a clearer picture of both Stevenson's skill as a storyteller and the novel's social and political context.

For the better part of a century "Kidnapped" has occupied an ambiguous position in literary and cultural studies. Its initial appearance in a weekly magazine called "Young Folks Paper," along with Stevenson's disingenuous comment that the novel had a diverting rather than a serious aim, have in effect trapped the book in the never-neverland of children's literature. Yet it is universally acknowledges as a classic of world literature and the novelist always considered it his finest achievement -- taken together with its sequel, "David Balfour," the best he was capable of in fiction. Now, for the first readers can plainly see why Stevenson placed his story of David Balfour on so high a pedestal. Drawing on the unique autograph manuscript in California's Huntington Library, Professor Barry Menikoff faithfully reproduces the text as Stevenson originally wrote it, restoring the punctuation (of which the novelist was a master) and recovering the distinctive and often singular language that had been altered or deleted. The effect is to deepen and illuminate the Scottish texture of the novel. For a book so embedded in Scottish history as "Kidnapped," so revelatory of its fierce loyalties and violent enmities, the discovery that Stevenson was even more nationalistic than we had known comes at an opportune moment, with the opening of the new Scottish parliament. This handsome new edition of a novel whose avowed purpose was the recovery of an important part of Scots history reproduces for the first time the original drawings that accompanied the text during its serialization in "Young Folks." Professor Menikoff's substantial introduction situates the book in its cultural context, and enables us to see why Stevenson's contemporaries were both entranced and awed by his achievement. And in his extensive notes to the novel he reveals Stevenson's enormous prestige as an authority on language, both English and Scots, for "Kidnapped" was widely drawn upon as a reference by lexicographers for the "Oxford English Dictionary" and the "Scottish National Dictionary." Finally, for a tale that charts the "wanderings" of David Balfour over the land and seas of Scotland, this edition is the first to provide a gazetteer of place-names encountered during the course of those travels.

Book Description Paperback. Condition: New. New edition. Language: English. Brand new Book. Set in Scotland in 1751, Kidnapped remains one of the most exciting stories ever written. Young David Balfour, orphaned then betrayed by his Uncle Ebenezer, his so-called guardian, falls in with Alan Breck, the unscrupulous but heroic champion of the Jacobite cause. Shipwreck, murder and dramatic escape through the Highlands are just a few of the ingredients of this highly charged tale of intrigue, action and triona, the lesser-known sequel, immediately continues David's story. Back in Edinburgh, he is caught up in the aftermath of the Appin murder; certain of the accused man's innocence, David's determination to testify on his behalf is impeded by a series of adventures, not least of which is hid passionate but problematic romance with Catriona, granddaughter of Rob Roy MacGregor. Alan Breck features again, becoming involved in the thrilling attempt to reunite the lovers. One of his own favourites, Stevenson said of Catriona that he would 'never do a better book'. Seller Inventory # AAZ9781853261176