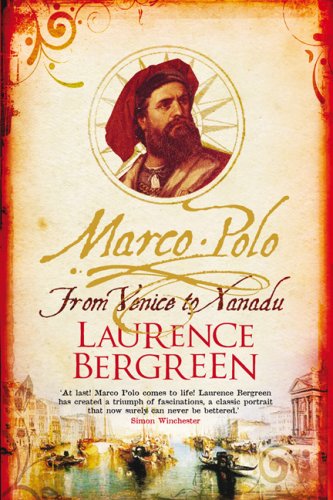 A fascinating account of one man's amazing life - Sunday Express

Review:
Drawing on original writings and walking in the footsteps of Marco Polo himself, Laurence Bergreen's Marco Polo: From Venice to Xanadu is the most definitive biography of the legendary traveler to date, separating the man from his considerable myth. Look inside Marco Polo (Click on thumbnails to see a larger image):

Marco Polo timeline (All dates given in the Julian calendar): 1215 - Kublai Khan, the grandson of Genghis Khan and Marco Polo's mentor, is born. 1254 - Marco Polo born in Venice, although one tradition locates his birthplace in the Venetian colony of Dalmatia. 1260 - Kublai Khan becomes leader of the Mongols and in 1271 founds the Yuan ("Origin") Dynasty. 1271 - Young Marco Polo leaves Venice with his father Niccolo and uncle Maffeo, bound for the court of Kublai Khan. 1274 - Kublai Khan oversees a failed Mongol invasion of Japan, as the Mongols, masters of the Steppe, meet their match at sea. 1275 - The three Polos arrive in Shang-du, Kublai Khan's summer palace immortalized by Samuel Taylor Coleridge as Xanadu; Marco begins his years in the service of the Khan. 1276 - 1293 - Marco travels throughout Asia, reaching the coast of India, and possibly Zanzibar, gathering intelligence for Kublai Khan and serving as a tax collector for the Yuan (Mongol) dynasty. 1281 - Kublai Khan's second failed invasion of Japan, a serious blow to his prestige. 1292 - The Polos escort Princess Kokachin to Persia to marry, their last formal service to Kublai Khan before departing. 1294 - Kublai Khan dies, freeing the Polo family, who undertake a dangerous return voyage by sea. 1295 - Marco, his father, and uncle, arrive in Venice after their 24-year absence. They have been away for so long that their fellow Venetians do not recognize them. 1298 - Marco is captured by the Genoese in the Battle of Curzola, according to some accounts, and confined to a cell in Genoa with a romance writer, Rustichello of Pisa, to whom he dictates his adventures in China, his reminiscences of Kublai Khan, his life among the Mongols. 1300 - Safely back in Venice, Marco Polo marries Donata Badoer; the couple has three daughters. 1324 - As manuscript versions of his exploits spread throughout Europe, Marco Polo dies in Venice, claiming that he did not reveal the half of his experiences in his remarkable Travels.

About the Author:
Laurence Bergreen is the prize-winning author of Over the Edge of the World: Magellan's Terrifying Circumnavigation of the Globe, as well as James Agee: A Life; Louis Armstrong: An Extravagant Life; Capone: The Man and the Era; and As Thousands Cheer: The Life of Irving Berlin, each considered the definitive work on its subject. A graduate of Harvard University, he lives in New York City. As part of the research for this book, he traveled Marco Polo's route across Mongolia and China.