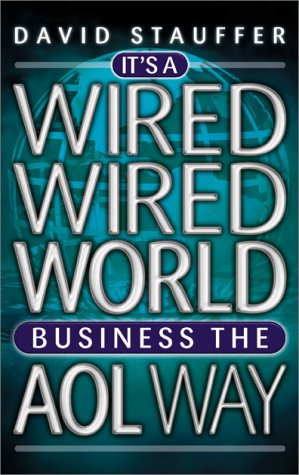 AOL is the world's single most successful internet-based company, whether measured by number of customers, annual revenues, or profits. CEO Steve Case is a visionary, a charismatic leader who has taken AOL from obscurity to become the pre-eminent new-media brand in less than 10 years.

In Business the AOL Way, David Stauffer examines this remarkable success story. While it may seem today that AOL has been a prominent name in the new-media world for as long as Apple or Microsoft, AOL in fact had fewer than 200,000 subscribers as recently as 1993. That number increased by a factor of 7,000% over the following five years. Before most executives even knew what the internet was, Steve Case had clearly seen its business potential. And while most of the superstar companies of the dot com world can only tell their investors of profits to come at some indefinite future date, AOL has achieved profitability that many believe can only grown stronger in coming years.

From the Inside Flap:
It’s a Wired, Wired World Business the AOL Way In It’s a Wired, Wired World: Business the AOL Way David Stauffer reveals the secrets, deals, schemes and dreams of the world’s #1 Webmaster and one of the world’s most innovative digital superstars. AOL is the world’s single most successful Internet-based company, whether measured by number of customers, annual revenues, or profits. CEO Steve Case is a visionary, a charismatic leader who has taken AOL from obscurity to become the pre-eminent new-media brand in less than 10 years. Case has increased the number of AOL subscribers by a staggering 4,000% in the last seven years. David Stauffer reveals the secrets of Steve Case’s strategic moves and shows how they are perfectly on target for dominating the .com world. Marketing research studies show that AOL is the most recognized brand among all new media companies. AOL has repeatedly made headlines, both for its gaffes and its triumphs. The result is that everyone — from the industry insider on Wall Street to the teenage geek on Main Street — has an opinion on AOL, its services, and its performance. In It’s a Wired, Wired World: Business the AOL Way David Stauffer charts the meteoric rise of Steve Case and AOL to become the world’s most successful Internet company. "[Case’s] story is a lesson in what a very smart man with a simple vision can do." — Newsweek Also by David Stauffer: Nothing But Net: Business the Cisco Way
From the Back Cover:
One: Go into Everybody?s Business
Two: Give Your Business a Human Face
Three: Never be Dissuaded from Pursuing Your Dream
Four: Kiss! (Keep It Simple, Stupid!)
Five: Ignore ?Irrelevant? Experts ? Customers Rule!
Six: Don?t Shy from a Fight?
Seven: ?Or Hesitate to Sleep with the Enemy
Eight: Leverage Successes, Build Your Brands
Nine: Admit Mistakes and Grow Forward
Ten: Get to the Future Today

"While most Internet companies are small-time startups awash in red ink, AOL has become the first new-media company on a grand scale, more comparable to Newsweek or a cable company like TCI than to Netscape." ? Fortune, March 30, 1998 During prime time, the number of people logged on to AOL is more than are watching top-drawing cable networks such as MTV and CNN.

"AOL survived in part because Case was able to convey his quiet confidence to jittery customers, and because he was able to move more quickly and decisively to fix problems than his corporate competitors." ? Newsweek, January 24, 2000