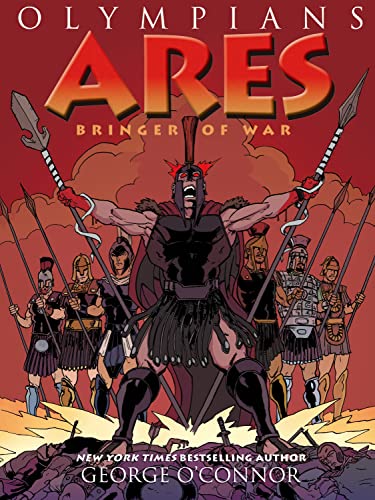 The myth continues in the tenth year of the fabled Trojan War where two infamous gods of war go to battle. The spotlight is thrown on Ares, god of war, and primarily focuses on his battle with the clever and powerful Athena. As the battle culminates and the gods try to one-up each other to win, the human death toll mounts. Who will win this epic clash of power? And how many will have to die first?

This title has Common Core connections.

George O'Connor is a New York Times-bestselling author and illustrator of the Olympians series as well as such graphic novels as Journey into Mohawk Country and Ball Peen Hammer. In addition to his graphic novel career, Mr. O'Connor has published several children's picture books. He lives in Brooklyn, New York.

“O'Connor draws most of his material for his final volume of his popular series from The Iliad, an account of a long and bloody war perfect for showcasing Ares' anger.” ―Booklist

“In this nuanced, multilayered view of the usually vilified bringer of war, O'Connor continues his exceptional graphic novel series about the Greek gods. Less a biographical take on the subject and more of a character study, this entry is seen through the lens of the events that take place in Homer's iconic battle-driven epic poem The Iliad. Just like the original source material, the complex relationships among the deities and the tension and drama that arise when the glory and fate of their own demigod sons are at stake, take center stage. Ares is presented in many ways as his father's son, as evidenced by his affair with Aphrodite, but he also tries to rebel against Zeus's practice of using humans for sport. O'Connor highlights that of all the gods, Ares is the only one who grieves the death of his mortal son, shedding light on his own strained relationship with his father. Humor and zingers combine with the author's adept handling of Greek mythology, history, and popular culture. The variety of panels lends a dynamic feel to the battle scenes and confrontations between the dueling sides. The mostly scarlet-tinged color scheme is in perfect tune with the raging, bloodthirsty god of war's modus operandi. The author's extensive notes amusingly explain connections to The Odyssey, The Aeneid, and the series' previous works. VERDICT This expertly executed graphic novel will have fans anxiously awaiting even more adventures of mythological proportions.” ―School Library Journal