Items related to Prince of Persia

Sina, A. B. Prince of Persia 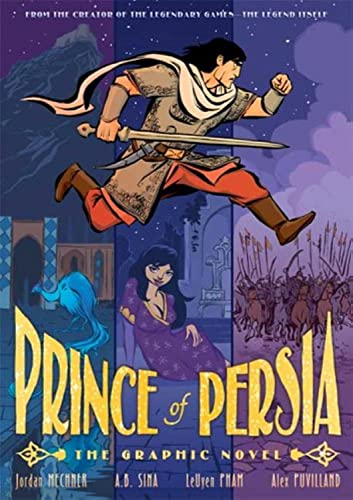 Long ago in Persia, there lived a Prince -- a man of honor, of valor, and full of strength -- a man for his people, who lived with them and took on their trials and hardships. And he was loved.

His name is no longer remembered. When people speak of him, they call him merely, 'The Prince of Persia,' as if there have been no others, and his descendants are enjoined to live like him, to be like him, to the ends of their days.

Long ago in Persia, there were many princes, one following another, sometimes quick, sometimes slow, sometimes fat, clever, joyous, and all more or less honorable. And in some of those princes there shone the spirit of The Prince of Persia, for in Persia time spins like a wheel, and what is to come has already happened, and then happens again, year in and year out.

This is the story of two of those princes, and of the destiny that threads their lives together.

Created by Jordan Mechner, the Prince of Persia graphic novel is beautifully written by poet A.B. Sina and opulently illustrated by LeUyen Pham and Alex Puvilland.

Arists LeUyen Pham and Alex Puvilland create vivid scenes against a stunning background of ruins, lush gardens, and desert landscapes in Prince of Persia. Inspired by the popular video game as well as The Arabian Nights, the graphic novel follows two princes living centuries apart whose lives nonetheless intersect: they live in exile, fight epic battles, and, of course, rescue a princess. In their transformations from the video game to the graphic novel, each character was revised multiple times. Some were discarded, like Farah, the female warrior, and others were refined, like Prince Guiv.

Take a look at how the authors transformed the Prince of Persia characters from their early sketches (click each image below to see the final sketch).

Jordan Mechner's videogames, including Prince of Persia, Karateka, and The Last Express, have received worldwide acclaim. Over 14 million Prince of Persia games have been sold around the world. He is also the author of Solomon's Thieves, and he wrote the script for the Disney movie adaptation of Prince of Persia: The Sands of Time, produced by Jerry Bruckheimer and starring Jake Gyllenhaal. Mechner sold his first game, Karateka, while he was still an undergraduate at Yale, and then moved directly on to creating Prince of Persia. These were among the first games to combine arcade action with realistic animation and cinematic storytelling, and both titles became #1 bestsellers and are now considered all-time classics. In 2003, Mechner wrote and directed the documentary Chavez Ravine: A Los Angeles Story, which was shortlisted for an Academy Award. He lives in Southern California.

A.B.Sina has written for film, magazines, and journals in North America and around the world. Born in Iran, he now works between Montreal and wherever else he can manage.

LeUyen Pham and Alex Puvilland are happily married in art. LeUyen has produced several acclaimed picture books for children, including her self-authored Big Sister, Little Sister. Alex has worked as a visual development artist for Dreamworks Feature Animation and on numerous films. They live in San Francisco with their son Leo.