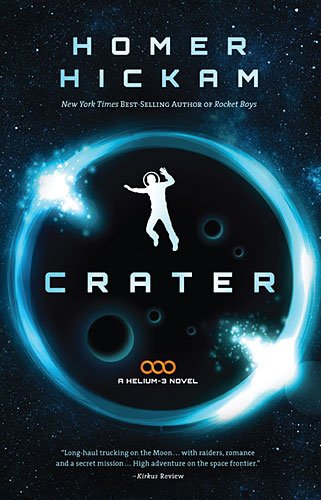 A Helium-3 miner named Crater makes a treacherous journey through space to find a mysterious and priceless treasure.
It's the 22nd Century and a tough, pioneering people are mining the moon
to produce energy for a desperate, war torn Earth.  Crater Trueblood, an
orphan, loves his life in Moontown, a frontier mining settlement.  Just turned sixteen, Crater is already a seasoned Helium 3 miner, hoping someday to be a foreman on the scrapes.  But "the Colonel," the man who owns the mine, has a different plan for Crater which includes Maria, the Colonel's daring young granddaughter.  Crater, accompanied by Maria and his gillie--a sentient and sometimes insubordinate clump of slime mold cells--must shepherd a convoy of Helium 3 trucks across a forbidding river of dust while also looking for a mysterious, historical artifact that could mean the difference between life and death for every inhabitant on the moon.

From the Author:
Crater is the first of the Helium-3 trilogy. It is a tough look at a tough people who scrape out a living on the moon.  Nothing is easy for 16-year old Crater who is sent out across a thousand miles of the lunar "wayback" to seek out a prize that has already caused the death of two men. Eventually, he has to vault into space aboard a lunar Cycler, there to confront an enemy assault force made up of creatures who were born to do one thing: kill people.Here is the trailer for Crater which gives a taste of his adventure to come.  youtube.com/watch?v=seACNm1tzLo&feature=related
About the Author:
Homer Hickam is the author of the classic memoir Rocket Boys which was adapted into the beloved movie October Sky starring Jake Gyllenhaal.  He was once a dedicated NASA engineer who has always had his sights on the moon.  He is uniquely qualified with his wit, wisdom, and superb writing skills to pen the sensational new Helium-3 series, beginning with Crater, the story of a boy, a girl, a horse, and a battle across a thousand miles of the moon.

Book Description hardcover. Condition: New. BRAND NEW A portion of your purchase of this book will be donated to non-profit organizations.Over 1,000,000 satisfied customers since 1997! Choose expedited shipping (if available) for much faster delivery. Delivery confirmation on all US orders. Seller Inventory # 10849625