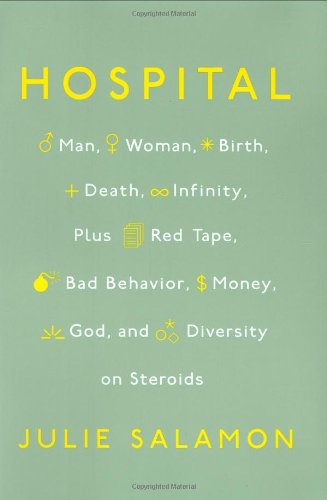 Traces a year at Brooklyn's Maimonides Hospital and its new state-of-the-art cancer center, offering insight into the particular challenges being posed by the region's increasingly multicultural populace while exploring how the hospital addresses key issues related to financial, technological, and ethical matters.

About the Author:
Julie Salamon is the author of several award-winning books for adults, including Wendy and the Lost Boys, as well as her debut novel for children,Cat in the City.Her writing has appeared in the Wall Street Journal, New York Times, New Yorker, Vanity Fair, and more. She lives in Manhattan with her family.
From AudioFile:
HOSPITAL is dispiriting. This portrait of Maimonides Medical Center in Brooklyn reminds us that hospital administrators spend an awful lot of time worrying about money, insurance, and paperwork. It also reminds us of America's diversity--an estimated 67 languages are spoken at the hospital; new residents in obstetrics learn to count to 10 in multiple languages. Karen White isn't quite equal to the task of delivering a book with little narrative thread that jumps around from drama to drama and doctor to staff person. Slightly longer pauses between the endless profiles of doctors and nurses and administrators (only a few patients) could help the listener keep up. Inauthentic accents are distracting--Irish nurses that don't sound Irish and South African doctors that don't sound South African. A.B. © AudioFile 2008, Portland, Maine