Items related to Looking for Mr. Gilbert: The Reimagined Life of an... 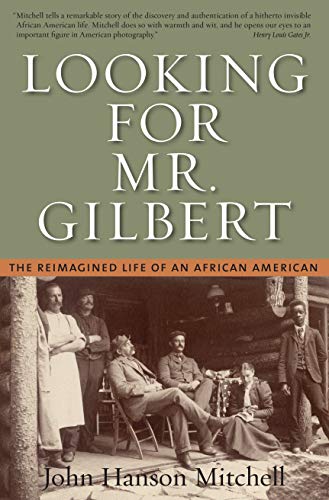 In the mid-1970s, John Hanson Mitchell discovered over two thousand antique glass plate negatives in the attic of an estate in Massachusetts. At the time, he believed the photographs to be the work of William Brewster, the nineteenth century ornithologist and conservationist. As a result of a tip from a Harvard research assistant, Mitchell came to believe that the plates were not the work of Brewster, but of his assistant, a little-known African American named Robert Gilbert.
In his quest to uncover the story, Mitchell’s trail leads from the archives of the Museum of Comparative Zoology at Harvard, to the countryside of Virginia; from the haunts of American expatriates in Paris, to the culturally-rich world of African Americans in Boston at the turn of the last century.
Gilbert remained as illusive as the image on the original negatives that he created more than a hundred years ago, but with careful deconstruction of the photographic images, Mitchell is able to make visible this invisible man. From the investigation of the haunting photographs of landscapes and people, Gilbert slowly comes into focus as a quiet, unassuming Renaissance man who forged on in the face of social pressures and American racism.

*Starred Review* Robert Gilbert, in the role of the trusted black servant, was the man behind William Brewster, the nineteenth-century white ornithologist and conservationist. Rendered virtually invisible by the passage of time, Gilbert is a shadowy figure appearing in antique glass-plate negatives depicting Brewster and his Boston Brahmin crowd. Mitchell's diligent search to learn the identity of the lone black man, quite comfortably--though marginally--situated in the photographs, unveils the life of a man who was himself quite accomplished. More than a servant, Gilbert was an assistant and a personal friend to Brewster and his wife, managing a farm they owned and traveling with them to Europe. Gilbert enjoyed an astonishingly full and adventurous life, working in the Museum of Comparative Zoology at Harvard, living in Paris, and even starting a business in Europe. Mitchell's exploration includes engaging conversations with a colleague, a black researcher, who helps put race and history into perspective, reflecting on many instances of blacks whose historic achievements aren't recognized or are subverted by those of whites. With his expertise in historical photography, Mitchell renders astonishingly detailed descriptions, giving flesh to the sparse historical record of Gilbert's achievements. A brilliant look at photography, history, and race. Vanessa Bush
Copyright © American Library Association. All rights reserved

Looking For Mr. Gilbert: The Reimagined Life Of An African American

LOOKING FOR MR. GILBERT: THE REI