Items related to The Poet of Tolstoy Park 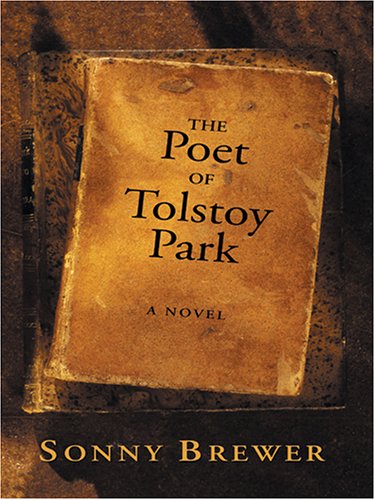 In 1925, Henry Stuart's doctor gave him a year to live. Henry moved to a ten-acre patch of land in Fairhope, Alabama, founded by a freethinker who shared his love of Tolstoy. Henry gave away his shoes, built for himself a round house of hand-poured concrete blocks, grew his own food, and lived for another twenty years. This brilliant novel is based on a true story of inner strength and unique wisdom.

Available only in Wheeler Hardcover 6.

From the Inside Flap:
"The more you transform your life from the material to the spiritual domain, the less you become afraid of death." Leo Tolstoy spoke these words, and they became Henry Stuart's raison d'etre. "The Poet of Tolstoy Park is the unforgettable novel based on the true story of Henry Stuart's life, which was reclaimed from his doctor's belief that he would not live another year.
Henry responds to the news by slogging home barefoot in the rain. It's 1925. The place: Canyon County, Idaho. Henry is sixty-seven, a retired professor and a widower who has been told a warmer climate would make the end more tolerable. San Diego would be a good choice.
Instead, Henry chose Fairhope, Alabama, a town with utopian ideals and a haven for strong-minded individualists. Upton Sinclair, Sherwood Anderson, and Clarence Darrow were among its inhabitants. Henry bought his own ten acres of piney woods outside Fairhope. Before dying, underscored by the writings of his beloved Tolstoy, Henry could begin to "perfect the soul awarded him" and rest in the faith that he, and all people, would succeed, "even if it took eons." Human existence, Henry believed, continues in a perfect circle unmarred by flaws of personality, irrespective of blood and possessions and rank, and separate from organized religion. In Alabama, until his final breath, he would chase these high ideas.
But first, Henry had to answer up for leaving Idaho. Henry's dearest friend and intellectual sparring partner, Pastor Will Webb, and Henry's two adult sons, Thomas and Harvey, were baffled and angry that he would abandon them and move to the Deep South, living in a barn there while he built a round house of handmade concrete blocks. His newneighbors were perplexed by his eccentric behavior as well. On the coldest day of winter he was barefoot, a philosopher and poet with ideas and words to share with anyone who would listen. And, mysteriously, his "last few months" became years. He had gone looking for a place to learn lessons in dying, and, studiously advanced to claim a vigorous new life.
"The Poet of Tolstoy Park is a moving and irresistible story, a guidebook of the mind and spirit that lays hold of the heart. Henry Stuart points the way through life's puzzles for all of us, becoming in this timeless tale a character of such dimension that he seems more alive now than ever.

"From the Hardcover edition.

About the Author:
SONNY BREWER owns Over the Transom Bookshop in Fairhope and is board chairman of the nonprofit Fairhope Center for the Writing Arts. He is the former editor in chief of Mobile Bay Monthly; he also published and edited Eastern Shore Quarterly magazine, edited Red Bluff Review, and was founding associate editor of the weekly West Alabama Gazette. Brewer is the editor of the acclaimed annual three-volume anthology of Southern writing, Stories from the Blue Moon Cafe.
From the Hardcover edition.