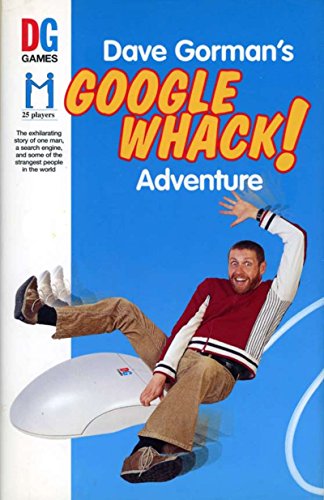 A hostage to the vagaries of a search engine, Dave Gorman has become a 21st century Dice Man throwing his fortune to the fates―the only difference is that the dice Dave rolls has 3 million faces...

If someone called you a 'Googlewhack' what would you do? Would you end up playing table tennis with a nine year old boy in Boston? Would you find yourself in Los Angeles wrangling snakes, or would you go to China to be licked by a performance artist? If your name is Dave Gorman, then all of these things could be true....Fuelled by a lust for life and a desperate desire to do anything except what he is supposed to be doing (writing that novel and growing up), Dave falls under the spell of an obscure internet word game―Googlewhacking. Addicted to the game, and gripped by obsession, Dave travels three times round the world, visiting four continents and the unlikeliest cast of real life eccentrics you'll ever meet in what becomes an epic challenge, a life-changing, globe-trotting Googlewhack adventure.

Dave Gorman, 30, is a Perrier Award-nominated comedian and writer. His TV work has earned him two BAFTAs for The Mrs Merton Show as well as his own two BBC2 series.

Francophile noun: one who admires France and the French.

Namesakes noun: plural of namesake. A person or thing with the same name as another.

In particular this seems to afflict a lot of people in what is laughingly referred to as the entertainment ‘industry’. At the age of 30 it seems that all singers want to be actors, all actors want to play Hamlet and all comedians want to write novels. This is, of course, an act of vanity and should be abhorred.

Now, as it goes, nothing could have been further from my mind as I hit 30. I’d been making a living of sorts, treading the boards in the name of comedy since I was 19 and on my thirtieth birthday life conspired to take me to the millionaire’s ski resort of Aspen, Colorado where, having already performed a show of my own, I was then taken to a theatre where I watched one of my childhood heroes, Steve Martin, perform live. He did a routine about his singing testicles. There was a strange dignity to the performance and it brought the house down.

Francophile Namesakes 7 The lesson was clear; turning 30 didn’t mean I had to grow up. On 2 March 2001 there was not one single part of me that wanted to be taken seriously. As far as I was concerned, life was good, I was having fun and I could see no reason to change my course.

A year later, however, it hit me like a train. I woke up on my 31st birthday and was gripped by a sudden desire to be taken seriously. It was time to stop acting the fool and behave like a grown-up. (This may or may not be connected but among my presents was a novel called Shopgirl. Written by Steve Martin; childhood hero, testicular vocalist, comedian, movie star … and novelist.)

I sat down at my computer and looked at a blank screen. Here goes, I thought, here comes the Booker Prize, let’s see what the world thinks about me when I’ve finished this. I stared at the blank screen, locked my fingers together, stretched my arms, palms out and cracked my knuckles because that’s how I’d seen writers do it in the movies. Then I put the kettle on. I wanted a cup of tea but coffee seemed more like a writer’s drink. Maybe I should start smoking? I could think about that later. Eight cups of coffee into the day and there were still no words on the screen. This whole writing-a-novel malarkey was looking a lot harder than it seemed. That night, as I stayed awake, shaking the caffeine through my system, I came up with a plan: at ten o’clock the next morning I would ring my agent, Rob.

‘Don’t be ridiculous, Dave. You’re very busy. I’ve got a lot of work lined up for you, things are on a roll, if it ain’t broke, don’t fix it.’

‘Well, OK, Rob, if that’s what you think. I’ll give up on the whole crazy idea. It was a pipedream anyway.’

That was how I imagined the conversation would go, that was my plan. After all, I was very busy. My diary was full and so were the theatres. It wouldn’t last forever but the sun was shining and surely any agent worth his salt would want to make hay. If I was told not to write a novel, that was better than just failing to write a novel, wasn’t it? That way I could get drunk in a few bars and complain to strangers about how I wanted to write a novel but that circumstances just wouldn’t let me. I could be a frustrated novelist! Oh yes, I could make drunk strangers in bars take me seriously, and to be honest, wouldn’t that be enough? Admittedly this plan contained only a tiny fraction of the kudos of winning the Booker Prize but it involved absolutely none of the work.

I picked up the phone.

‘But what about the theatres?’

‘I think you’re just the right kind of person to write a novel,’ said Jake.

The three of us were in Rob’s office and it seemed that everyone was taking me seriously.

Jake was in publishing, an editor working for Random House, the world’s largest publisher. He was young and very enthusiastic and he demanded the same kind of enthusiasm in others.

‘Fiction is hard work. It’s just you, your imagination and your computer,’ he said, ‘You have to take it seriously.’

‘That’s exactly what I want. I want to take it seriously,’ I said, before offering a completely unnecessary, ‘I’m 31.’

Crikey; Rob and Jake were both giving my literary ambitions real considered thought. This plumped up my ego and made me take the idea seriously too. I was trying to convince Jake to give me the deal, and in doing so I was starting to convince myself. Maybe, if I had to write a novel it would be easier. If I had a publishing deal, most importantly, if I had a deadline to meet, I was sure I’d be able to do it. Because everyone else was taking the idea seriously, I was being seduced by it all over again.

‘Are you really serious, Dave?’

And I was. But I needed to convince Jake somehow. I had to demonstrate how serious I was. I had an idea.

‘I’ll tell you how serious I am, Jake. I’m actually thinking—’ pause for effect ‘—of growing a beard.’

Jake stared at me. I stared back at him but only because I didn’t dare look at Rob. I knew what he was thinking: please don’t screw up this meeting with your stupid beard talk. I could feel his eyes burning into the side of my face. There was an awkward silence but I continued to meet Jake’s stare and refused to blink. Rob coughed but Jake and I kept on staring.

‘Really,’ I said with a solemn nod.

Jake sucked some air through his teeth, clearly weighing up my beardly potential. Rob coughed again.

‘OK, er ...’ Rob seemed embarrassed, ‘the beard is ... a bold offer, Dave, but I think the meeting would be best served if we concerned ourselves with the real business in hand.’

‘Rob. This is the business in hand,’ I said, Jake still fixed in my stare.

‘Gentlemen,’ Jake interrupted, breaking out of my gaze, ‘I think we have a deal.’

Jake offered his hand and I shook it. There was a pause while we all sat and contemplated what had just occurred. As far as I could work out, the world’s largest publisher had just offered me a publishing deal on the condition that I grew a beard. Rob, as my agent, was the first to speak.

‘I’m glad we have that sorted out, but there are, of course, some details still to negotiate.’

‘Of course,’ I said. ‘Just so you know; you might not think it to look at me with my brown hair, but the beard will be ginger.’

There was a long pause.

‘I was thinking more in terms of contract details. For the book,’ said Rob, who clearly couldn’t see the important message contained within the subject of my beard.

‘Right,’ I said, trying to invest the word with great understanding.

‘Right,’ I said because I wanted to see if we’d go round again. We didn’t.

Instead there was another pause, during which I realised there was something important we hadn’t yet discussed.

Rob looked at his watch. Jake looked slightly bemused. He was probably wondering what witchcraft we’d worked in order for him to agree a publishing deal solely on the status of my facial hair. I suspect it was the first literary deal of its kind.

‘Why don’t you two get a coffee and discuss it?’ said Rob, who had other business to attend to. He represented a few people, and some of them, being female, couldn’t rely on facial hair tactics to secure employment.

In the comfy leather armchairs of the café next door I exp...