Items related to A Memory of War

Busch, Frederick A Memory of War

A Memory of War 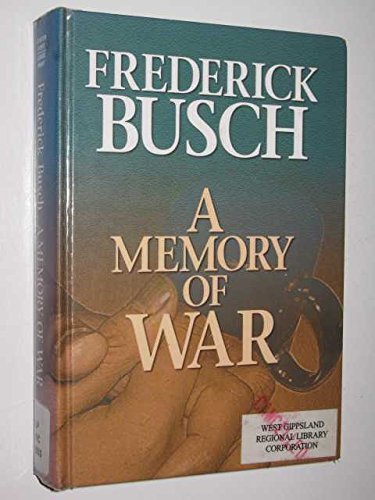 From the Inside Flap:
Psychologist Alexander Lescziak savors a life of quiet sophistication on Manhattan?s Upper West Side, when a new patient declares he is the doctor?s half-brother, the product of a union between Lescziak?s Jewish mother and a German prisoner-of-war. Suddenly Lescziak finds his world closing in on him, as events acquire new significance: his failed marriage, his wife?s possible affair with his best friend, and the disappearance of his young lover, who also happens to be his suicidal patient. In search of answers, Lescziak delves into the recesses of his own mind, when the past threatens to press in inexorably upon the present.
About the Author:
Frederick Busch (1941–2006) was the recipient of many honors, including an American Academy of Arts and Letters Fiction Award, a National Jewish Book Award, and the PEN/Malamud Award. The prolific author of sixteen novels and six collections of short stories, Busch is renowned for his writing’s emotional nuance and minimal, plainspoken style. A native of Brooklyn, New York, he lived most of his life in upstate New York, where he worked for forty years as a professor at Colgate University.

A Memory of War Busch, Frederick