Items related to So, You Wanna Be a Writer?: How to Write, Get Published,... 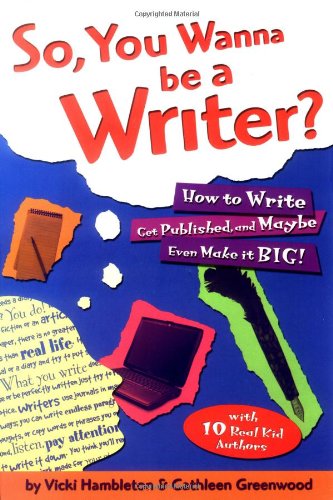 A fresh and fun guide for aspiring young writers covers every aspect of writing and publishing from honing your writing skills and finding inspiration for stories to approaching publishers and getting published, and examines the genres of poetry, journalism, fiction, and nonfiction. Original.

About the Author:
Vicki Hambleton is a verbal tutor for students in grades 9–12. She was a project editor and writer for Benchmark Education, specializing in books for grades K–8. Her writing has appeared in numerous children's publications including Cobblestone, Calliope, and Footsteps.

Cathleen Greenwood is a teacher, published writer, consultant for the National Council of Teachers of English, and veteran presenter at national and local professional conferences on teaching and writing. She has helped countless students successfully submit writings to magazines, publishers, and contests.

You pull into the parking lot of your favorite bookstore, knowing that this time it’s not going to be just to meet your buddies. Someone else is expecting you—YOUR FANS! You keep your sunglasses on as you walk in the front door, head down, but the manager recognizes you anyway. You try to finish your last call as you are whisked away to the greenroom, offered your favorite drink, and escorted to the book signing table. It’s covered with a red velvet cloth, piled high with copies of YOUR book, and there are scores of fans jostling for position behind the velvet ropes to make sure they get their books signed by the author—YOU!

Cameras flash, your smile dazzles. You whip out your favorite pen and start signing as fast as you can, murmuring words of gratitude in response to the exclamations of love and adulation from each reader.

Is this what it’s like to be a writer? You bet! Okay, maybe it’s not always like this—but it does happen. And, believe it or not, it can happen to you, especially if you start thinking of yourself as a writer now and doing the things real writers do. This book will help you—we promise.

Keep that thrilling, ultimate scenario in mind, but let’s get a bit more realistic for a few minutes. Look over the list below and circle what you really think it’s like to be a writer.

9. a life of poverty

Let’s see what you think about writing:

· If you circled all the items on the list, you are right on target—being a writer is often like all of these things at one point or another.

How One Author Got His Start

Michael Crichton’s books have sold over 150 million copies. In 1994, Crichton became the only creative artist ever to have works on the bestseller lists in television, movies, and books (with ER, Jurassic Park, and Disclosure, respectively). Believe it or not, the creator of Jurassic Park and ER first got published when he was a kid. We conducted the interview below in 2001. He passed away in 2008.

My father was a journalist, so I grew up seeing him type to earn a living. His example made writing seem like a normal thing to do. I was attracted to writing from an early age and did a lot of it. I wrote for my high school and town newspapers, and for the college newspaper. Later on, in medical school, I started writing novels to pay my way through school.

I was fourteen years old when I published my first piece. On a family vacation I visited Sunset Crater Volcano National Monument in Arizona, and I thought it was pretty interesting and that more people should know about it. My parents said that the Sunday New York Times travel section published articles by readers and suggested I write an article for the paper. So I sent in an essay—and they published it. I was very excited.

What advice would you give a young writer?

I always tell writers to write. If you think you’re interested in writing, just start writing. Write extra compositions for school assignments. Write for the school paper, the yearbook, or the town newspaper. Write articles. Write poetry. Write plays. Write anything you have a mind to, but write a lot.

This will help you learn how to do it—I believe writers are invariably self-taught. But equally important, you’ll also find out if you really like writing as much as you think you do. Although writing can be very satisfying, it’s a hard job, and a peculiar one. You’ve got to be self-disciplined, and you’ve got to tolerate being alone a lot. It’s a great life, but it’s not for everyone.

If you like to write, you are one of the luckiest people in the world. Writers shape thoughts into words, and those words can inspire, motivate, teach, and entertain those who read them. Have you ever read something that made you cry? If I Stay, Walk Two Moons, or Charlotte’s Web? Or maybe a story in a magazine about a terrible famine? How about something that made you angry? Scared? Happy? How about a book that you just couldn’t put down and had to finish under the covers long after midnight . . . perhaps a Harry Potter tale?

All of these stories started with writers. There are as many different kinds of writers as there are stories to tell. Writers don’t just write books either. When you watch ESPN to catch the sports scores, the reporters on those shows read scripts written by writers. Or when you watch your favorite sitcom, a writer did that as well. The words you read in advertisements and hear in the audio for video games were all carefully chosen by writers. There are novelists, bloggers, poets, playwrights, screenwriters, reporters, medical writers, copywriters, and technical writers, just to name a few. And the good news is that you can make a living as a writer. Your writing can take you all over the world if you choose, or you can create books in the comfort of your own home—even in your pj’s if you want!

Twenty-three-year-old Juli Weiner graduated from Barnabrd, a liberal arts college affiliated with Columbia University, and works as a blogger for the magazine Vanity Fair.

I’ve wanted to write professionally since middle school. I had become obsessed with early episodes of Saturday Night Live (1975–1980), and used to write comedy sketches in journals and take down notes while watching reruns on TV. Initially I was much more interested in screenwriting than journalism. After writing a satirical column for my high school paper, though, I came around to the idea that journalism and nonfiction writing could be just as colorful, voicey, and fun as creating characters.

What do you like to write the most and why?

My favorite type of writing to do—and, luckily, the type of writing I do most frequently—is political satire. I love following the news, sifting through sound bites to pinpoint something particularly absurd, and taking a faulty line of reasoning to its logical conclusion.

What are your goals for your writing future?

I’d love to challenge myself by doing longer pieces that involve more investigative reporting. As a blogger, I’m often strapped for time and don’t get to include as many details in my pieces, interviews, and research as I would be able to if I wrote for a weekly or monthly magazine. I also would love to do a story that involves sneaking around, using a flashlight, or wearing a disguise.

What was your first published piece (and format) and how did you feel?

My first professional published piece was a chart comparing the Palin and Kardashian families that appeared in the February 2011 issue of Vanity Fair. I was elated to see my name—and picture and biography, in the contributors section!—in print. Vanity Fair is a magazine I’ve admired since I was old enough to read, and it was beyond incredible to be included alongside the best living journalists and photographers. I felt a huge sense of accomplishment, pride, and relief—similar to what I imagine a physically painless version of childbirth might feel like.

Where else have you been published?

I’ve written a few pieces for Vanity Fair and write several smaller pieces a day for their website. I’ve also written for Wonkette, The Huffington Post, Vice.com, Radar.com, and The Awl.

Do you write full-time, and, if not, would you like to? What would be your dream job?

I am lucky enough to write full-time. Barring the possibility of taking a time machine to the late ’80s to write for Spy magazine, cofounded by Vanity Fair editor Graydon Carter, I can’t imagine a job better suited to my interests, strengths, and goals than my current one.

What advice would you give to a young writer?

Don’t worry about trying to write in the style of someone who’s already published or successful—that niche is already occupied! Just write however you write best. In terms of landing a job: keep in touch with everyone and be kind to everyone. Don’t get nervous when people your age get an earlier career bump than you; if you’re good, it won’t be long until someone takes notice.

And one bit of practical advice: back up everything. It’s a law of physics that computers break at precisely the most inopportune time.

Do you think reading helps your writing?

Absolutely. I’m a voracious reader of novels. The best journalism is as compelling and fluid as fiction, so just having an understanding of the way people tell stories and introduce characters (even if they’re not real people) is essential. I tend to be a completist: I try to read everything by Philip Roth, then everything by Martin Amis, and so on.

What are your favorite reads?

I read The New Yorker and New York every week, and Vanity Fair an...

SO, YOU WANNA BE A WRITER?: HOW