Items related to The Best Women's Stage Monologues of 1999

The Best Women's Stage Monologues of 1999

The Best Women's Stage Monologues of 1999 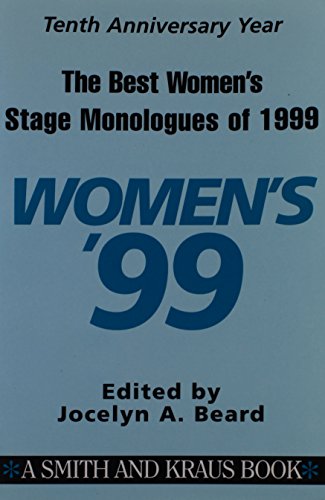 The 10th edition of America's best-selling monologue series for women. All monologues are excerpted from plays produced during the 1999 theatrical season.

Playwright/Editor Jocelyn A. Beard, a veteran of NYU's film school and the Yale School of Drama, has edited almost forty monologue books for Smith and Kraus. Her Screenplay, Igor and the Lunatics, was made into a feature film and subsequently listed in Heavy Metal magazine as "One of the 10 Sleaziest Movies Ever Made!" Notwithstanding, Jocelyn lives in an old haunted house in the Hudson River Valley with her husband, Kevin Kitowski, their beautiful daughter, Blythe, and lots of dogs.

The Best Women*s Stage Monologues of 1999

Shipping: US$ 22.27
From United Kingdom to U.S.A.
Destination, rates & speeds