Items related to In God's Truth 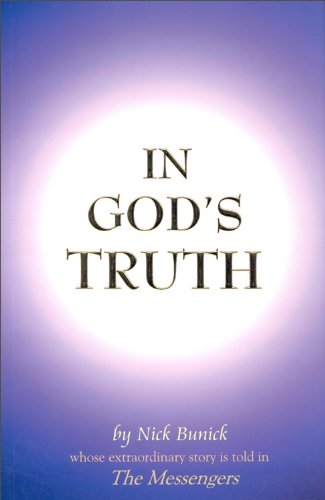 On January 14, 1995, when angels intervened in the life of Nick Bunick, he was a high-profile businessman, the owner of several corporations and on the board of directors of others, two of which are publicly traded on the stock market.

After the angels' intervention, Nick placed this behind him. Now his only business activity is as founder and president of The Great Tomorrow, a non-profit corporation committed to spiritual and humanitarian activities. He currently conducts spiritual symposiums throughout the country and publishes a monthly newsletter. He has appeared on many national television and radio shows and is considered one of the foremost spiritual teachers in the country.

Nick was born near Boston in one of the poorest cities in the United States. His parents, Russian immigrants, were orthodox Jews. He himself acknowledges a spiritual relationship with God but does not practice a formal religion. When he asked his angels why it was that he had been selected for this mission, considering he did not have a formal religion, their response was, "What religion do you think God is? Mennonite, Quaker, or Presbyterian? God also does not have a formal religion, but embraces all teachings that share God's messages."

Nick believes that each one of us is on the same journey, trying to be at one with God. And as we develop our spiritual relationship with God, we recognize that we are all brothers and sisters.

In God's Truth will help you on your journey.

Communication with angels may be nothing new in metaphysical literature, but only one author has claimed to have relived the apostle Paul's life through hypnotic regression, and used those memories boldly to denounce inaccuracies and outright falsehoods in the New Testament of the Bible. Expounding on his story as told in The Messengers, Nick Bunick's In God's Truth delivers the inspirational messages of love carried to earth by angelic beings, and tackles the daunting task of changing the world's conceptions of who Jesus, Paul, and the original disciples really were. Bunick's iconoclastic tactics have met strong resistance from the orthodox Christian community, but no one can deny his role as a key figure in the growing spiritual movement during these final years of the 20th century. In God's Truth is a testament to how Bunick has attained this position. --Brian Patterson