Items related to The Keys to Conflict Resolution: Proven Methods of... 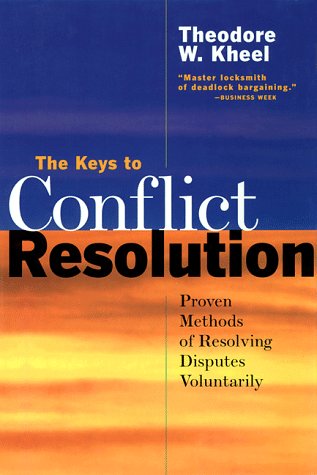 What do the NFL, the A.F.L.-C.I.O., and the U.S. government have in common? All have been clients of Theodore Kheel. Here, the master mediator describes the ten commandments for negotiators and shows how applying a soft touch produces results in any situation.

In The Keys to Conflict Resolution, noted mediator Theodore W. Kheel tells how he helped resolve some of the great showdowns between management and labor over the past 50 years in America. Tapped as a mediator by presidents, governors, and business leaders, Kheel is a veteran of more than 30,000 labor disputes. He was in the thick of the national railroad strikes of the 1960s, the nasty fights between New York City's longshoremen and shippers, and the contract wars involving players and owners in the National Football League.

While most books on negotiating teach you to beat an opponent, Kheel stresses the art of persuasion and the techniques of compromise. "There are times when a tough-as-nails approach will work," he writes. "But the basic aim of negotiation is to get your opponent to agree to give you what you want. You may be able to bully him into doing that. You can also be successful by being skillfully persuasive." Kheel is an expert at the three types of "alternative dispute resolutions": mediation, arbitration, and negotiation. And in separate chapters he explains his "ten commandments" and other fine points for mastering each. Kheel peppers the book with anecdotes about his efforts to settle labor disagreements throughout his long career, including those involving personalities such as comedian Carol Burnett and the late Washington newspaper publisher Philip Graham. This book is for anyone seeking advice on how to reach a deal that's best for all sides at the table. --Dan Ring

THE KEYS TO CONFLICT RESOLUTION: