Items related to Off the Map: The Curious Histories of Place-Names

Nelson, Derek Off the Map: The Curious Histories of Place-Names 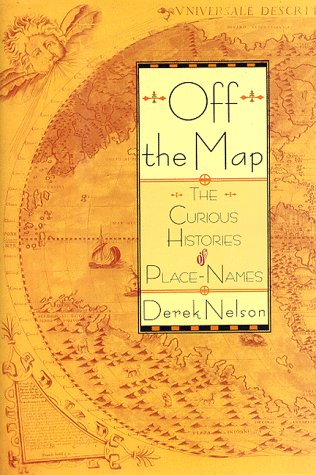 Explores the origins of place names and the relationship between geography, cartography, and historical events

An informal discussion of how the deceptively solid boundaries and names appearing on maps (past and present) represent the intersection of geography with history, fantasy, prejudice, propaganda, wishful thinking, and pure chance. Maps are an attempt to depict an unstable world with a complex past and, as Nelson (Moonshiners, Bootleggers, and Rumrunners, not reviewed) notes, to ``send ominous messages and trace ethnic and religious fault lines.'' At any given time, more than a hundred boundaries are disputed, but some maps skirt reality or create their own. For example, Arab maps ignore Israel or call it Palestine, and Syrian maps claim territory for Syria that has been part of Turkey for 50 years. But then, imaginative map-making has an established history. During the Middle Ages, the kingdom of Prester John was a staple of European maps. Even an increase in firsthand accounts did not ensure accuracy; for example, Columbus insisted that he that he had reached the Orient, and accommodating cartographers stretched Asia to fit his claims. One place may acquire several designations because of transliteration snags, mispronunciation, or misunderstanding, as when Chinese told foreign traders that they were from Chin (their ruling dynasty) rather than Kung-ho-kuo (their country). Some names reveal fragments of local history: Mohawks sneered at the hunting skills of Algonquins residing in New York State's northern mountains by calling them Hatir˘ntaks (``they eat trees''), whence Adirondack. Others trace changes in government, as when St. Petersburg changed to Leningrad and back again. Place names can be wonderfully descriptive, such as Mose-os-Tunya, ``smoke that thunders,'' or imperialist, such as Victoria Falls, thus named by David Livingston. Such claiming by naming continues even today: While orbiting the moon, astronaut James Loving dubbed one of its peaks Mount Marilyn, for his wife. Enlightening entertainment for those who browse the atlas so long that they forget what they meant to look up. (50 maps) -- Copyright ©1997, Kirkus Associates, LP. All rights reserved.

This amusingly written little book contains a wealth of fascinating and arcane information about maps and cartographers. Maps rarely illustrate what they purport to show, notes the author. Rather, the orientation of the continents, the names and borders of countries and whether or not they are inhabited, the migrations of peoples, and the presence of ethnic groups?all reveal the political and economic motives of cartographers. Thus, Japanese maps label the Kurile Islands with Japanese names, Russians maps with Russian names, and Arab map makers deliberately omit Israel. While medieval maps were peculiar combinations of folklore and religion intended to entertain, early modern maps, designed for a country's financial profit, tried to be scientific. Nelson (The Ads That Won the War, Motorbooks, 1992) has here produced a book with wide appeal. Recommended for public and academic libraries.?Bennett D. Hill, Georgetown Univ., Washington, D.C.
Copyright 1997 Reed Business Information, Inc.

Book Description Hardcover. Condition: New. This is a brand new book! Fast Shipping - Safe and Secure Mailer - Our goal is to deliver a better item than what you are hoping for! If not we will make it right!. Seller Inventory # 1XGQA90001IM_ns

Off the Map: Curious Histories of Place Names

Shipping: US$ 13.90
From United Kingdom to U.S.A.
Destination, rates & speeds

OFF THE MAP: THE CURIOUS HISTORI