Items related to The Metamorphoses of Ovid

Ovid The Metamorphoses of Ovid

The Metamorphoses of Ovid 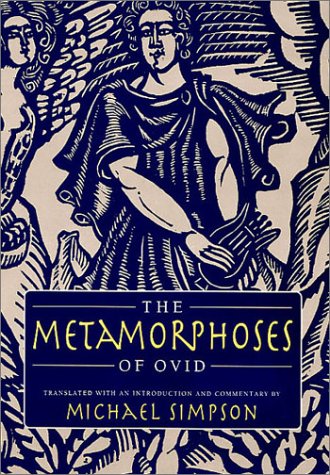 Composed in Latin in the early years of the first century by the Roman poet Ovid, the Metamorphoses presents a collection of amazing tales of transformation based on Greek mythology and Roman legend. Ovid was the most gifted storyteller of his age, and the Metamorphoses is his masterpiece. It begins with the creation of the world and continues through the founding of Rome to the reign of the emperor Augustus in Ovid's own time.
Many of the great stories from Greek mythology can be found in the Metamorphoses, including those of Apollo and Daphne, Jupiter and Io, Actaeon, Narcissus and Echo, Pyramus and Thisbe, Daedalus and Icarus, Orpheus and Eurydice, Pygmalion, and Venus and Adonis. The genial narrator sails unperturbed through tale after tale of love and loss, quest and battle, violence and suffering, human striving and folly. Ovid's wit and verbal adroitness quicken the pace of the narrative and make the work supremely accessible.

Michael Simpson is professor of classics in the School of Arts and Humanities at the University of Texas at Dallas. He is author of "Gods and Heroes of the Greeks: The 'Library' of Apollodorus" (University of Massachusetts Press, 1976).

The Metamorphoses of Ovid