Items related to Lilacs for the Garden

Bennett, Jennifer Lilacs for the Garden 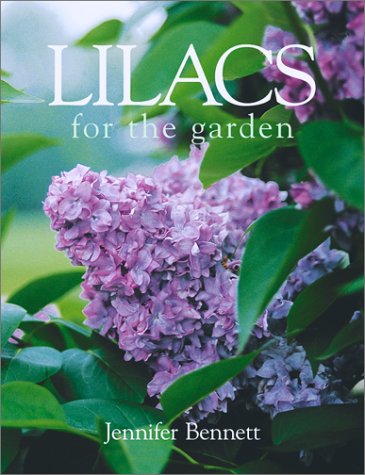 Jennifer Bennett has lived "lilac country" for more than 20 years, and is well placed to appreciate the lilac, which not only flourishes in cultivated gardens but roams wild across the countryside. Tracing the journey of a plant that will "grow well everywhere, in every soil," from its origins in Asia through Europe and the United Kingdom to North America some 250 years ago, Bennett brings this most familiar and glorious of flowers to vibrant life.

The lilac's bloom is a sign of spring everywhere, but a lesser-known fact is that its emerging flowers are also used as indicators by farmers planning pest control and crop plantings and by scientists engaged in charting global warming. Filled with uncommon information about this common plant, Bennett's book features chapters on its history; planning, planting and pruning; the lilac's place in the landscape, whether alone, in groupings or with perennials; a species list of usual and unusual plants, with names that range from 'Charles Lindbergh' and 'Martha Stewart' to 'Charm' and 'Glory'; exotic lilacs for the adventurous connoisseur; and lilac aid, which addresses one of gardening's most vexing questions: "Why won't it bloom?"

Lilacs for the Garden is a compendium of essential information for all who cherish this most resonant of garden companions. Whether you seek detail on plant requirements, mulching, grafting, fertilizing, multiplication, bloom time, fragrance, abiotic and biotic stresses, renovating neglected lilacs or a list of recommended species and where to find them, Bennett's latest book is an essential resource.

Jennifer Bennett is the author of the best-selling The New Northern Gardener, Lilies of the Hearth, Our Gardens Ourselves and The Annual Garden.

"These are well-known hardy shrubs which grow well everywhere, in every soil and all exposures."
-- D.W. Beadle, Canadian Fruit Flower and Kitchen Gardener (1872)

Everywhere. Every soil. All exposures. Consider the lilacs of the field, how they grow. They are not fertilized, nor are they pruned, yet Solomon in all his glory was not arrayed like one of these. Come May, the Bible is paraphrased in abandoned farm fields and along country roads in eastern Ontario, where I live. This is lilac country, where for two weeks in spring, the abundance of flower and perfume has to be experienced to be believed. And like sleek pets looking over the fence at their wilder kin, there are lilacs in almost every garden showing off bigger blooms and brighter colors before, during and after the roadside show.

The lilac was once called the poor man's flower. The reason was that common lilacs were the chain letters of horticulture: You simply pried a rooted shoot from the base of a shrub and planted it somewhere else -- just about anywhere else. Even mature lilacs could be moved. More than two centuries ago, George Washington wrote in his journal, "Removed two pretty large and full grown Lilacs to the No. Garden gate, one on each side, taking up as much dirt with the roots as cd. be well obtained." Lilacs tolerate drought, cold winters, dry, hot summers and almost any soil. They are undemanding and generous, the perfect guests. Thanks to lilac tenacity, they grow splendidly and abundantly -- sometimes too abundantly -- from northern Canada to Colorado, as tough as the settlers who brought them. The lilac is the state flower of New Hampshire because, according to historian Leon Anderson, it is "symbolic of that hardy character of the men and women of the Granite State."

Lilacs flourish as though they've always been here, but their time on this continent has been brief. As Ernest H. Wilson of the Arnold Arboretum in Massachusetts said about lilacs, "None are indigenous in America, but notwithstanding this, all the species introduced have proved hardy in the arboretum. A singular and most interesting fact." Lilacs simply happen to like it here, all 20-odd species of them.