Items related to Facing the Wind 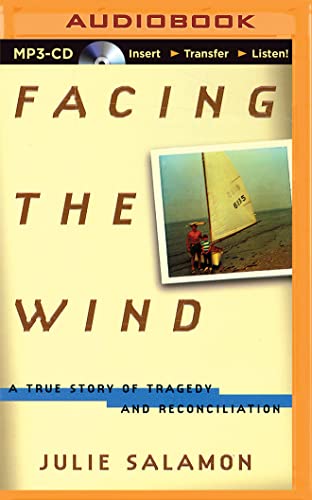 Bob Rowe and his wife Mary worked hard to build their American dream. A suburban home, barbecues in the summer, and a fast track corporate job made their life look ideal to outsiders. Yet they faced one of the most difficult challenges for a couple: their son Christopher was born severely handicapped and disabled. As a family, they managed to navigate through the tough times by being hands-on parents. Their efforts were emboldened by a group of extraordinary women - all of whom also had disabled children - who acted as a support system for one another. Yet something slowly began to happen to Rowe . . . His deceased mother's voice started to reverberate in his head instructing him to murder his family; reality disintegrated and a new job was lost when it proved too overwhelming. Finally a short stay in a psychiatric hospital did nothing to quell his sudden volatility . . . In a horribly violent act, he killed his wife and children. Seen through the eyes and thoughts of Rowe's friends and second wife (whom he married on release from the psychiatric hospital where he spent just a few years for the murder of his family), Salamon braids the story of a man's roller coaster life (from ideal family man to murderer to someone struggling for redemption) with the touching and heroic tales of the mothers who were left looking on in shock at the tragedy no one ever could have anticipated.

From the Back Cover:
"Readers should experience the suspense for themselves . . . Facing the Wind had me tossing at night and racing to finish it by day. It is a rare combination of superb reporting and narrative skill . . . It is not a book that can be read and forgotten."
— James B. Stewart, New York Times Book Review

"Happily for the reader, Ms. Salamon is a fine reporter . . . In tackling the issue of personal heroism, Facing the Wind brings home the point that while certain of life's difficulties can be fought and conquered, others must simply be borne with digity. From what depths do humans draw the strength to do that? What is their reward?"
— The New York Times

"A suspenseful, well-researched account of the life of a Brooklyn lawyer Robert Rowe, who murdered his wife and three children and escaped prison with the insanity please in 1978 . . . A perturbing read that prods us to ponder guilt and innocence from new perspectives."
— Kirkus Reviews, starred review

"This true-crime story reaches beyond the relatively narrow focus of the genre to ask painful and provocative questions about guilt and forgiveness."
— Publishers Weekly, starred review

"...A sensitive and fascinating account...Her book is important not only for its lessons on the ravages of mental illness but for its ability to overturn our assumptions about evil, innocence, guilt and compassion.
—- Carmela Ciuraru, The Wall Street Journal
"This book will be a fascinating read. Well written and heavily researched, it clearly demonstrates Salamon's prowess and her journalistic roots. Readers will not easily forget this tale."
—- Library Journal
From the Inside Flap:
ary Rowe’s second child, Christopher, was born with severe neurological and visual impairments. For many years, the Rowes’ courageous response to adversity set an example for a group of Brooklyn mothers who met to discuss the challenges of raising children with birth defects. Then Bob Rowe’s pressures ― professional and personal ― took their toll, and he fell into depression and, ultimately delusion. And one day he took a baseball bat and killed his three children and his wife. In Facing the Wind, Julie Salamon not only tells the Rowes’ tragic story but also explores the lives of others drawn into it: the mothers, a social worker with problems of her own, an ocularist ― that is, a man who makes prosthetic eyes ― a young woman who enters the novitiate out of shame over her childhood sexual activities, and a judge of unusual wisdom. Facing the Wind is a work of redemptive compassion and understanding. It address