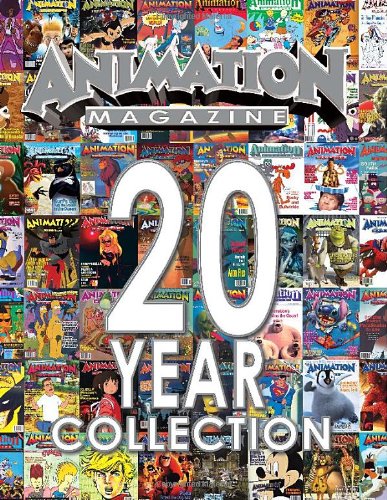 In 1987, a small independent publication known as Animation Magazine began chronicling the achievements and artistic personalities working in the booming animation field. Twenty years later, the magazine continues to chart the careers and projects that define this important part of the entertainment business. In celebration of its 20th anniversary, the magazine has put together a colorful compendium of essays, interviews, lists, charts and faithful full color reproductions of every cover from the past two decades. ANIMATION MAGAZINE: 20-YEAR COLLECTION offers an important cross-section of the talented individuals who have contributed to the history of this thriving artistic arena in the past two decades. With contributions by John Lasseter, John Canemaker, Bill Plympton, Sylvain Chomet, Peter Lord, Leonard Maltin and Nancy Cartwright, this beautiful coffee-table book is a must-have for any animation lover or professional who works in the entertainment field. ANIMATION MAGAZINE: 20-YEAR COLLECTION is a picture-perfect snapshot of the evolution of the art form with a unique way of looking at some of our favorite and popular animated characters and people.

John Lasseter is the CCO of Disney/Pixar. Sylvain Chomet is the director of "The Triplets of Belleville." Nancy Cartwright is the voice of Bart Simpson, and many other popular animated characters. John Knoll is a multiple-Oscar-winning vfx supervisor ("Pirates of the Caribbean"). Leonard Maltin and Charles Solomon are award-winning animation and film historians. Peter Lord is the co-founder of Aardman Animations. Terry and Jean Thoren are co-founders of Animation Magazine. Ramin Zahed is the editor-in-chief of Animation Magazine.

"This hansome collector's volumn is a must-have for anyone who's interested in charting the evolution and growth of the animation and visual effects industries inn the past two decades. Insightful articles by the likes of John Lasseter, Peter Lord and Nancy cartwright are included in this animation-lover's dream, which also features colorful reproductions of Animation magazine's covers from 1987 to the present. It's the perfect holiday gift for the toon-lover in your life!" --Alastair McLean, Animation Focus Monthly