Items related to Do I Look Fat in This?: Life Doesn't Begin Five...

Jessica Weiner Do I Look Fat in This?: Life Doesn't Begin Five Pounds from Now 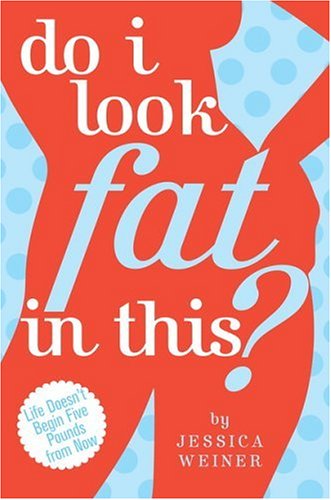 The author of the memoir, A Very Hungry Girl, outlines a step-by-step plan for breaking self-destructive cycles and creating a healthy self-image, explaining how a woman's perspective about her body shapes every aspect of her life while offering strategies on how to overcome relationship issues and build self-esteem. 50,000 first printing.

Jessica Weiner is the author of A Very Hungry Girl. She's also a self-described Actionist, reaching audiences nationwide through her groundbreaking and empowering work as a speaker and a performer.

Jessica is copresident of No. 11 Media, a production company aimed at creating meaningful media with realistic images. She has been featured on The Oprah Winfrey Show, CNN, MTV, The View, Good Morning America, and countless other media outlets.

Chapter One: Decoding the Language of Fat

Who would have ever thought that three little letters could cause such fear, anxiety, and pain in someone's life?

I don't know one person who is not affected by those three letters. I don't know one woman who has never had a thought about how much she weighs or whether she is, or is getting, fat. Unless you're from a faraway planet called Self- Love, you grew up in a world where women are still valued, honored, rewarded, validated, and appreciated based on the size and shape of their bodies.

You can have the best parents, the most prestigious education, the most loving partners, the greatest friends, and you, my love, will still be susceptible to equating your worth as a woman to your dress size. And this isn't a new realization. We have always loved and hated women based on their beauty and their physical stature, and we have always loved and hated ourselves based on how easily (or not) we have lived up to these standards of womanhood.

Waiting to Be Skinny

I recently met a brilliant young woman at an Ivy League conference on women's issues. She had just graduated magna cum laude from her school, but she confided that she couldn't remember a damn day of her college experience. "Why?" I asked, utterly shocked at this statement. "Because," she said, "I have been waiting till I was skinny to enjoy my life. And it hasn't happened yet, so while I just finished my education at one of the country's most prestigious schools, I can't remember anything about it because I was too busy dieting, hating my body, and waiting to be skinny."

Are you waiting to be skinnier, thinner, more toned, more tanned, better dressed, more lovable, sexier, nicer, smarter, funnier, or wealthier before you really begin your life? Millions of us are. And it's a complete waste of time. Body obsession and the quest for perfection are destroying our lives, and we are willing partners in this destruction.

That is how I've translated the word "fat." Feelings, action, thoughts. It reminds me that we are just speaking two different languages. The Language of Fat is the overall title for a general sense of uneasiness and dissatisfaction in our lives. We are not fulfilled in our jobs, relationships, friendships, or self-esteem, so we focus on the external -- because that seems more within our realm of control and influence. We have to think about what's going on inside, too.

Odds are that if you were able to answer any of the questions above, you are speaking the Language of Fat and may not even know it.

The Language of Fat

Your health, wealth, family, relationships, and career are all affected by the Language of Fat and how you speak about your body. It seeps into other areas of your life because body image is about your self-image and about how you imagine your life should be.

Remember, your life is worth more than the number of calories you eat during the day. Or the number of times you run around the track. You should design the life you desire. And before you can do that, you have to look at what's been holding you back, informing your decisions and opinions.

No one is immune to the power of this language. And it will take a collective effort from people willing to take action in their everyday lives to shift this language, to decode it, deconstruct it, and put a new language in its place. That's what we'll try to do together in this book.

What Happened to Penny

The word "fat" became a weapon to me when I was in grade school. It was the word girls used to wound one another. And it was the worst reason for rejection from a guy. It was the ultimate and most decimating cut-down. Nobody wanted to be called fat. Not the kids who really were or the girls who never would be. "Fat" could mean a lot of things. Undesirable, messy, ugly, out of control, stupid, lazy, unpopular. Once you were called fat, it stuck with you like gum on your shoe; you might be able to get the majority of it off, but there would always be a trace of the sticky stuff there.

For girls it meant complete girl failure. I remember seeing a gaggle of prepubescent girls circle a new student named Penny, who had just blown us all out of the water with her perfect score on a spelling test. She was smart and she knew it -- a deadly combination for those of us already hating ourselves at an early age. Girls with poor self-esteem can smell confidence like dogs smell fear, and then the mission is clear: Do your best to destroy the girl in the group who actually likes herself.

And so they formed a circle around Penny one day after gym class and unleashed upon her the most devastating of offenses: "Penny is so...fat." It was simple, and it did the trick. Penny became pegged as the girl with a weight problem. The girl who was smart but fat.

The only time Penny had the chance to reverse her girl curse of being fat came when she had stayed home from school for a week because she had mono. When she returned, she had lost a lot of weight. There was no way anyone could call Penny fat without looking really lame. Penny relished her new post-sickness body for a few days, but soon she began to return to her normal self. And then the teasing resumed. Because, in the hierarchy of the preteen world, once a group finds its "fat victim," it sticks with him or her until all torment and torture are complete.

The crazy thing about this story is that I can't even tell you if Penny actually had a weight problem. Not that it really matters, anyway. But I don't remember what Penny looked like; she was just the smart new girl in class who got a perfect score on her spelling test. However, as soon as the fat blanket was thrown on her, all I remember is her embarrassment at becoming a social pariah.

Forty percent of elementary school girls are on a diet.

Thou Shalt Not Be a Fat Woman...Ever!

How old were you when you first heard the word "fat"? When did it become the very thing you designed your life around not becoming?

We are socialized early on to understand that girls should want to be slim and pretty, not fat and ugly. Seems logical, right? Who in her right mind wants to be fat and ugly? But what is missing in these descriptions are the millions of other things we can be in our lives.

Let's get smart about this. The Language of Fat is not really just about the word "fat." It starts with this word, the most emotionally recognizable word for women in this country, and it spreads into other words, into a deeper and sometimes more subtle language that can keep us from ever knowing we are speaking it.

The girls who torment other girls probably don't even realize they've been fed a steady diet of body-loathing terms in their young years on this earth. Before we understand the meaning of a word, the energy associated with the response it brings has an impact on us. The girls know that the word "fat" is just something no girl wants to be. They've probably heard their mothers say it, perhaps when getting dressed or preparing dinner. Maybe they've heard their mothers ask their fathers or stepfathers, "Honey, do I look fat in this?"

No matter how, they learned it. They mimicked it. Now they use it and they watch it get them results. They may continue to speak the Language of Fat every day and may spend their lives poking, prodding, and praying never ever to become fat themselves.

Remember, the fear of being fat isn't only relegated to women with preexisting weight problems. The notion of not becoming fat occupies a lot of time and space for women of all shapes and sizes.

Becoming fat is a realistic fear for women, one that controls entire lives and millions of daily activities. This is not uncommon; all women have some sort of fear about this issue. It's almost like it's one of the Ten Commandments, or a federal law.

It's a Bonding Thing

The fear of becoming fat may be irrational, but it causes you much stress in your life -- and the lives of those around you -- because you continue to speak the Language of Fat.

What does being "fat" mean to you? What does it mean in your relationships? In your career? In your family? What would happen to you if people perceived you as fat?

Decoding the Language of Fat is not rocket science. It is about listening -- to yourself and to others -- and asking deeper questions. The notion of "fat" means different things to different people. "Fat" can be a catchall phrase for many other emotions. It's much easier going through the world as a woman saying, "Ooh, I don't want to be fat," rather than, "I am frightened of being unloved or abandoned." Hearing the first of those statements, we all nod our heads in knowing approval, but at the second statement we run in the other direction -- because the poignant fe...

Do I Look Fat in This?

Shipping: US$ 8.21
From United Kingdom to U.S.A.
Destination, rates & speeds

DO I LOOK FAT IN THIS?: LIFE DOE