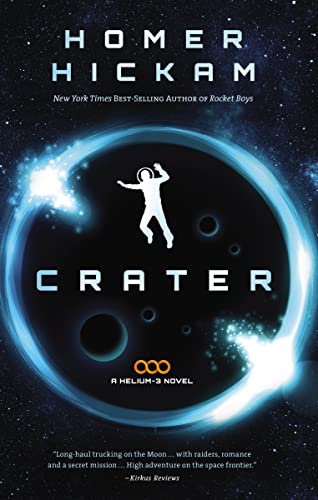 New York Times bestselling author of Rocket Boys, Homer Hickam, takes us on a whole-your-breath adventure across the moon in the first of his young adult series, Crater.

“Readers will be caught up in Homer Hickam's thrilling novel of life on the moon!”—Donna VanLiere, New York Times & USA Today bestselling author of The Good Dream and The Christmas Shoes

A mining colony on the moon. A deadly mission. And a secret bigger than two worlds.

It’s the 22nd Century. A tough, pioneering people mine the moon for Helium-3 to produce energy for a desperate, war-torn Earth.

Sixteen-year-old Crater Trueblood loves his job as a Helium-3 miner. But when he saves a fellow miner, his life changes forever. Impressed by his heroism, the owner of the mine orders Crater to undertake a dangerous mission. Crater doesn’t think he can do it, but he has no choice. He must go.

With the help of Maria, the mine owner’s frustrating but gorgeous granddaughter, and his gillie—a sometimes insubordinate clump of slime mold cells—Crater must fight both human and subhuman enemies. He’ll battle his way across a thousand miles of deadly lunar terrain and face genetically altered super warriors in his quest to recover an astonishing object that will alter the lives of everyone on the moon . . . and beyond.

“Long-haul trucking on the Moon . . . with raiders, romance and a secret mission . . . High adventure on the space frontier.” —Kirkus Reviews

From the Author:
Crater is the first of the Helium-3 trilogy. It is a tough look at a tough people who scrape out a living on the moon.  Nothing is easy for 16-year old Crater who is sent out across a thousand miles of the lunar "wayback" to seek out a prize that has already caused the death of two men. Eventually, he has to vault into space aboard a lunar Cycler, there to confront an enemy assault force made up of creatures who were born to do one thing: kill people.Here is the trailer for Crater which gives a taste of his adventure to come.  youtube.com/watch?v=seACNm1tzLo&feature=related
About the Author:

Homer Hickam (also known as Homer H. Hickam, Jr.) is the bestselling and award-winning author of many books, including the #1 New York Times memoir Rocket Boys, which was adapted into the popular film October Sky. A writer since grade school, he is also a Vietnam veteran, a former coal miner, a scuba instructor, an avid amateur paleontologist, and a retired engineer. He lives in Alabama and the Virgin Islands.